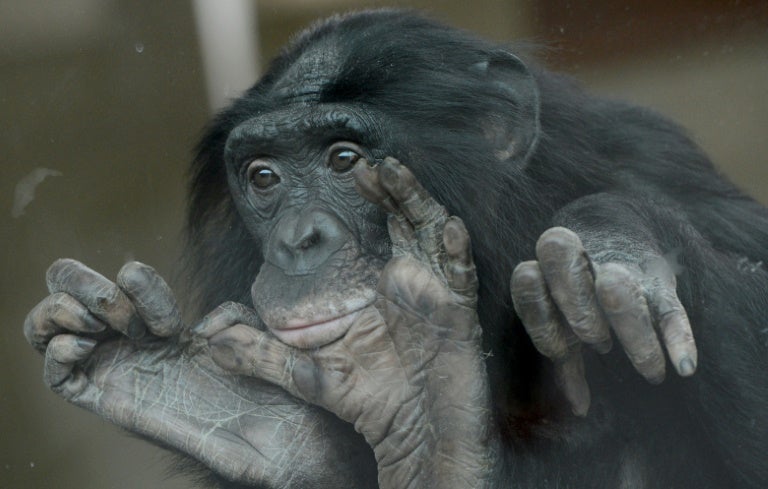 Bonobos are often described as the “hippies” of the ape world, but researchers have concluded they aren’t all peace and love. Image: Franziska Kraufmann -/DPA/AFP

Sex-crazed, easy-going and cooperative, bonobos are often described as the “hippies” of the ape world. But unlike humans, they seem to have a fondness for bullies, researchers said Thursday.

A report in the journal Current Biology unveiled a new aspect to the personalities of bonobos, our closest genetic cousins in the animal world along with chimpanzees.

Study co-author Christopher Krupenye of Duke University said the results of a series of experiments carried out with bonobos in the Democratic Republic of Congo “surprised” researchers, since bonobos are generally less aggressive than chimps.

“Bonobos are highly socially tolerant in food settings and help and cooperate with food in ways that we don’t see in chimpanzees,” he said.

“However, dominance still plays an important role in their lives.”

A study in 2007 showed that in people, infants as young as three months prefer people who are kind and helpful.

To see if bonobos had the same tendency, researchers designed a series of experiments.

In one, they showed 24 bonobos a video of a Pac-Man-like figure trying to make it up a hill.

Another character enters the scene. Sometimes it is a helpful character, other times it was a character that shoved the Pac-Man back down.

Then they placed pieces of apple under two cutouts — one of the good guy and one of the bad guy. The bonobos tended to choose the treat under the cutout of the jerk.

In another experiment, “a human actor drops a stuffed animal out of reach. Then another person tries to return the toy to its rightful owner, but before they can a third person snatches it away,” said the report.

“Afterward, the bonobos choose whether to accept a piece of apple from the do-gooder or the thief.”

Again, they tended to choose the thief.

Prior to the skit, researchers measured the apes’ baseline preferences for each of the actors.

“The bonobos liked the mean people even more after they started behaving badly,” it said.

For bonobos, rudeness could be seen as a sign of social status and dominance. They may like these figures because it is beneficial to have mean guys on their side, researchers argued.

Having tough allies could gain them better access to food, or mates, or cut the risk of being bullied themselves.

The findings suggest that one of the characteristics that makes people different from apes is the tendency to avoid people who mistreat others.

“Humans might have this unique preference for helpers that is really at the heart of why we’re so cooperative,” said Krupenye, who is now a postdoctoral fellow at the University of St. Andrews in Scotland. AB