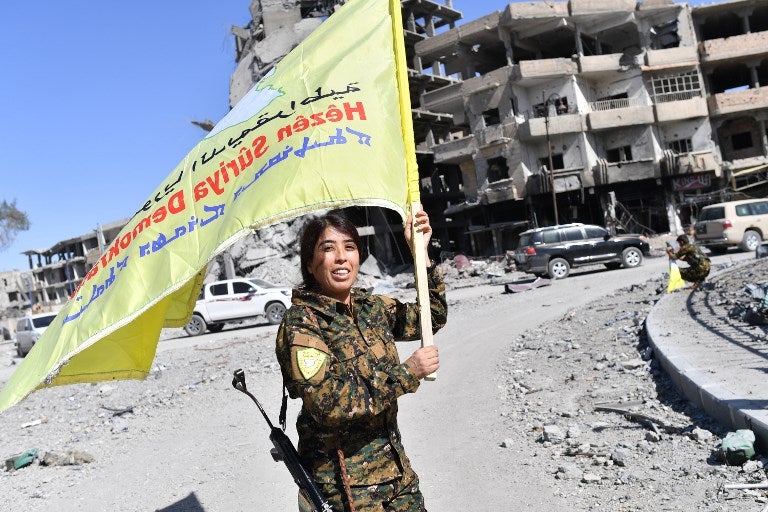 Rojda Felat, a Syrian Democratic Forces (SDF) commander, waves her group’s flag at the iconic Al-Naim square in Raqa on October 17, 2017. With ISIS facing imminent defeat in its former caliphate in Syrai and Iraq, its members are taking refuge in an online “virtual caliphate” that is shrinking by the day. AFP FILE

PARIS, France — On the brink of defeat in Iraq and Syria, the Islamic State group has been taking refuge in its “virtual caliphate” — but even online, experts say it is in decline.

Back in 2015, when the jihadists held territory the size of Italy, they also commanded a huge digital presence, flooding the web with slick propaganda lionising their fighters and romanticising life under their rule.

Today, with many of the top ISIS leaders either dead or on the run, what remains of the group’s once-sophisticated propaganda machine is also a shadow of its former self.

The jihadist group is less and less vocal on the web, largely leaving supporters whom it cannot control to speak in its name.

“It’s almost as if someone has pressed the mute button on the Islamic State,” said Charlie Winter, a researcher at King’s College London who has been studying ISIS communications for years.

Between November 8 and 9 the group even went completely silent for a full 24 hours in what Winter said was an “unprecedented” break from social media.

In 2015, when ISIS was ruling over roughly seven million people in Iraq and Syria, its propagandists produced “content from 38 different media offices from West Africa to Afghanistan”, Winter said.

But by December, more than three quarters of these outlets had been “almost totally silenced,” he added.

Albert Ford, a researcher at US think-tank New America who has studied the exodus of foreign fighters to join ISIS, also said the group’s media output was “falling off considerably”.

“Fewer places to get information, fewer ways to upload it,” he said.

Pushed to the ‘dark web’

Back in March as Iraqi forces were ousting ISIS from their long-held bastion Mosul, an AFP journalist was able to pick through the wreckage of what was once a jihadist media centre.

Between the burnt walls of the villa in an upscale part of the city were the remains of computers, printers and broadcasting equipment.

In the months before and since, the US-led military coalition fighting ISIS has repeatedly announced the deaths of senior ISIS communications officers, usually in air strikes.

Among them was the top strategist and spokesman Abu Mohamed al-Adnani, killed in a US strike in northern Syria in August 2016.

These days ISIS propagandists mostly use the web to encourage supporters to launch attacks on their own initiative, with the much-weakened group unable to play a direct hand in organising them.

These calls are often issued via the “deep web”, a heavily encrypted part of the internet which is almost impossible to regulate, or the Telegram app.

Winter said he had seen a trend emerging of posts seeking to cultivate a sense of nostalgia among supporters for the height of the group’s power.

By portraying events three years ago a “golden age” stolen by “the enemies of Islam”, ISIS is hoping to convince new recruits that such times could come again if they join the cause, Winter said.

Bruce Hoffman, a terrorism specialist at Georgetown University in Washington, said the principal danger of ISIS now lies in what he calls “enabled attackers”.

A jihadist recruit such as this would have “no previous ties to terrorist organisations,” Hoffman said.

“But he is furnished very specific targeting instructions and intelligence in order to better facilitate and ensure the success of his attack.”

Such wannabe jihadists need look no further than the internet for abundant advice that has been available online for years — and will merely pop up again after any attempt to remove it. /cbb