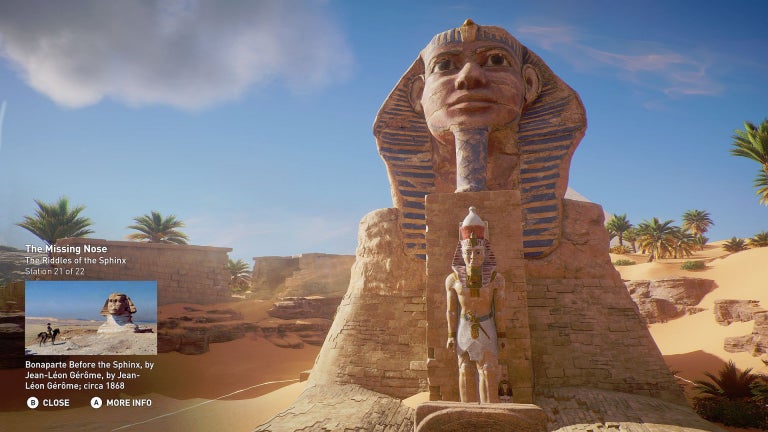 An educational Discovery Tour mode for “Assassin’s Creed: Origins” is set to arrive Feb. 20 for all owners of the action game and as a $20 (about P1,000) standalone download on PlayStation 4, Xbox One and Windows PC.

“You can play as an Egyptian, as a Greek, as a Roman, women, men, or kids,” inside the new Discovery Tour mode for “Assassin’s Creed: Origins,” explained historian Maxime Durand.

Speaking for a Q&A article with the game’s publisher, Ubisoft, Durand noted that the Discovery Tour idea has been gestating for ten years, when “Assassin’s Creed II” provided additional information on its characters, locations, and objects through an in-game Animus Database.

“Ever since the first game, we also had a lot of testimonies from teachers, from professors, asking, ‘Would you consider making a version of AC without conflict, without narrative?'” he said.

“They’d been using ‘Assassin’s Creed,’ recording sessions with their own consoles, trying to bring it into classrooms; but the age rating, for instance, was an issue.”

“We wanted to please our fans,” he said of the Discovery Tour mode’s potential audiences. “And then at the same time, we wanted to keep a level that would be usable for high schools and universities, which have very different needs.”

From a technological perspective, there are additional behind-the-scenes capsules in which the game developers explain the way they made “Assassin’s Creed Origins”, the historical discrepancies, constraints and inspirations.

Users can navigate through the Discovery Tour as one of 25 characters from the game, both fictional and historical, but this time they are exploring a world that goes about its business independently rather than one which is created for the player’s empowerment. JB