Cracking the mysteries of the elusive, majestic whale shark 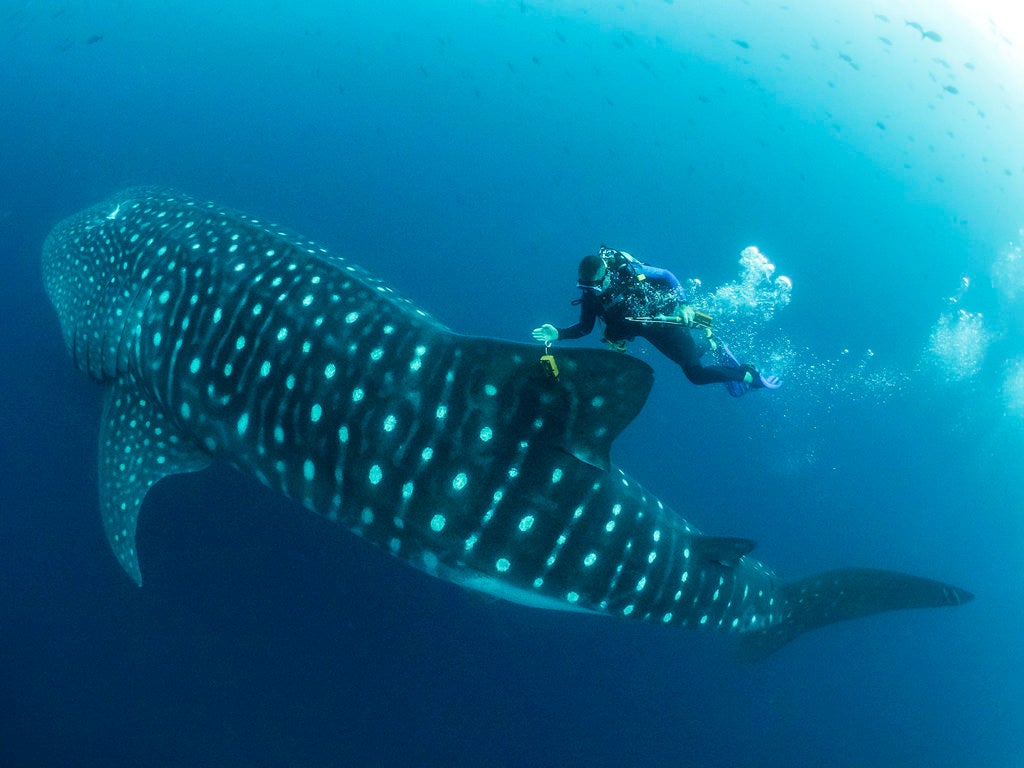 In this 2017 photo provided by Simon Pierce, Jonathan Green checks on a fin-mounted satellite tag on a whale shark in the Galapagos Islands area of Ecuador. Despite typically being bigger than a double-decker bus, the elusive whale shark has only tiny, almost useless teeth. It’s also one of the least understood animals in the ocean. Image: simonjpierce.com / AP

GALAPAGOS ISLANDS, Ecuador (AP) — It’s the biggest shark — and the biggest fish — in the sea, often found roaming in warm waters around the globe with its huge mouth agape in search of dinner.

Yet despite its hulking appearance, the whale shark has only tiny, almost useless teeth and is sometimes so docile that entire boatloads of people can swim alongside the enigmatic, spotted beast. It’s also one of the least understood animals in the oceans.

In an attempt to solve some of the most enduring mysteries, a group of scientists spent several weeks diving with whale sharks in the Galapagos Islands last summer and fall. They tried some never-before-used techniques on the species in the wild: taking blood samples and doing ultrasound exams, all while swimming furiously beside them underwater.

Here’s what’s known about these massive marine animals and what scientists are still trying to find out:

While they are comparable in size to whales, whale sharks are sharks. They typically grow to be bigger than a double-decker bus: between 6 to 16 meters (20 to 52 feet) and more than 20 tons. But as filter feeders, the enormous whale sharks are dangerous only to the plankton, fish eggs and tiny fish they chomp on.

The gentle giants aren’t particularly fast when compared to other sharks, but a simple wave of their tail propels them through the water faster than any human could ever swim. They have broad, flat heads and their entire dark-blue bodies are covered in dots that act as camouflage underwater.

After years of being overhunted by fishermen, whale sharks are endangered and at risk of extinction.

Whale sharks prefer warm waters and are often found feeding at locations around the world including Australia, the Philippines, Mexico and even in the oil fields off the coast of Qatar.

Hundreds of whale sharks — mostly young males — congregate in these areas at certain times of the year to scoop up fish eggs; it’s unknown where adult females are feeding then.

The vastness of the ocean usually makes the shy animals hard to find — Jacques Cousteau only ever saw two in his decades of sea exploration.

Marine biologists have been tagging whale sharks in recent years to track their movements. Others are trying to answer questions about their life and reproductive cycles. Only one pregnant whale shark has ever been found: In 1995, a dead whale shark was found off the coast of Taiwan with 300 embryos inside, all at different stages of development.

“The million-dollar questions are where are they mating, hunting and where do their young live?” said Jonathan Green, director of the Galapagos Whale Shark Project .

An international database was launched to identify as many whale sharks as possible through their distinctive dot pattern; each shark has a unique configuration of dots that act like a fingerprint. More than 8,000 sharks have been logged so far. Because scientists can only afford to spend a few weeks in the Galapagos each year, they depend on photos taken by visiting divers to figure out what the whale sharks are up to. So far, none of the sharks spotted in the Galapagos has been seen anywhere else.

Researchers in the U.S. and Japan are also working to sequence the whale shark genome. 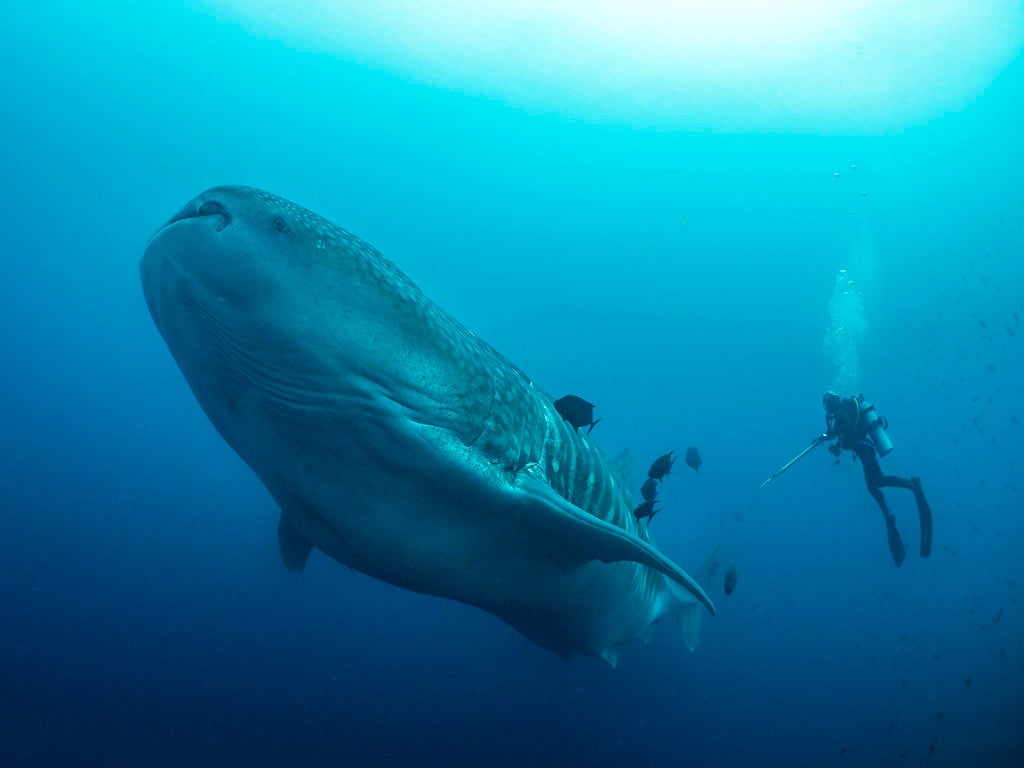 In this 2017 photo provided by Simon Pierce, Alexandra Watts takes a tissue sample from a whale shark in the Galapagos Islands area of Ecuador. Despite typically being bigger than a double-decker bus, the elusive whale shark has only tiny, almost useless teeth. It’s also one of the least understood animals in the ocean. Image: simonjpierce.com / AP

The Galapagos Islands are among the few places in the world where presumably pregnant whale sharks are regularly seen. More than 99 percent of the sharks identified in the volcanic archipelago are female and many have a swollen abdomen that suggests they’re expecting.

Some scientists believe pregnant whale sharks are cruising through the Galapagos, perhaps to extreme depths close to the northern-most island or to the open ocean near the equator to give birth. Either place would probably ensure the safety of their offspring from predators until they’re big enough to survive on their own.

Yet another theory suggests whale sharks may be giving birth closer to Peru — after two newborn whale sharks were found in fisheries there recently.

Because of the difficulty of conducting a medical exam on a free-swimming whale shark, researchers only obtained two blood samples, which haven’t yet been tested. The ultrasound exams were inconclusive and Green said more powerful machines are needed. Most ultrasound machines for animals are intended for abdominal walls that are 1 to 2 inches thick — but a whale shark’s abdominal wall is about 8 inches.

“When we first started studying these large animals, nobody knew how to go about it,” Green said. “Now that we have better technology and more experience, we will hopefully be able to answer some of the fundamental questions soon.”

Besides blood and ultrasound tests, scientists successfully tagged seven sharks. While not a large number, it’s important since so few whale sharks are tracked. The pressure of deep water can cause tags to drop off if the sharks dive below 2,000 meters (6,561 feet), which the animals often do if they’re traveling long distances or possibly giving birth. But any migratory data the scientists collect when sharks stay at shallower depths can help build a picture of the sharks’ life cycle.

Green and colleagues are planning further expeditions to the Galapagos later this year to continue their research, including more blood samples and satellite tagging.

“When you have so few data points, every single shark is important,” said Robert Hueter, director of the Center for Shark Research at Mote Marine Laboratory in Florida, who was not part of the Galapagos research. “These aren’t like goldfish where you can get sample sizes of hundreds at a time.”

In the last 75 years, the vast majority of whale sharks have been hunted by people for food and their numbers are still dropping, said Simon Pierce , chief scientist at the Marine Megafauna Foundation .

“If we do the things that are necessary to conserve the whale sharks, we’ll be conserving the ocean itself,” said Simon Thorrold of the Woods Hole Oceanographic Institute in Massachusetts.

For Green, who heads the Galapagos project, it’s more personal. “Even after years of diving with whale sharks, I still get goose bumps every time I see that huge blue shadow in the water. It’s an incredibly emotional experience.” AB