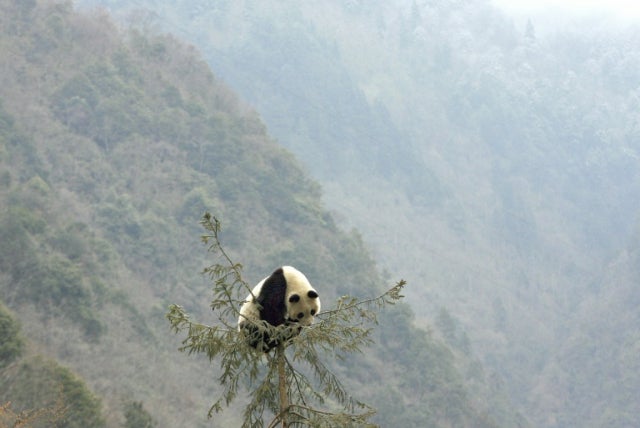 The Chinese park plans are aimed at enabling wild pandas that are currently isolated in several different areas of Sichuan, Shaanxi and Gansu provinces to mingle and hopefully breed. Image: Liu Jin / AFP

China will create a bastion for giant pandas three times the size of Yellowstone National Park to link up and encourage breeding among existing wild populations of the notoriously slow-reproducing animal, state media reported Thursday.

At least 10 billion yuan ($1.6 billion or around P82 billion) has been secured over the next five years for construction of the Giant Panda National Park in mountainous southwestern China for the nation’s favorite creature, the China Daily reported.

Plans for the park — which would cover 27,134 square kilometers (10,476 square miles) — were first put forward early last year by the ruling Communist Party and the State Council, China’s cabinet, the paper said.

Yellowstone, established in 1872 as the first US national park, spans 8,983 square kilometers.

The Chinese park plans are aimed at enabling wild pandas that are currently isolated in several different areas of Sichuan, Shaanxi and Gansu provinces to mingle and hopefully breed.

Giant pandas have a notoriously low reproductive rate, a key factor — along with habitat loss — in their status as “vulnerable” on the International Union for Conservation of Nature’s (IUCN) Red List of threatened species.

More than 80 percent of the world’s wild pandas live in Sichuan, with the rest in Shaanxi and Gansu.

The funding was secured via an agreement signed Tuesday by the Bank of China and the Sichuan provincial Department of Forestry, the paper said.

The bank is to secure the financing by 2023, to go toward poverty alleviation among people living in the remote area and necessary infrastructure and other construction for the park. AB