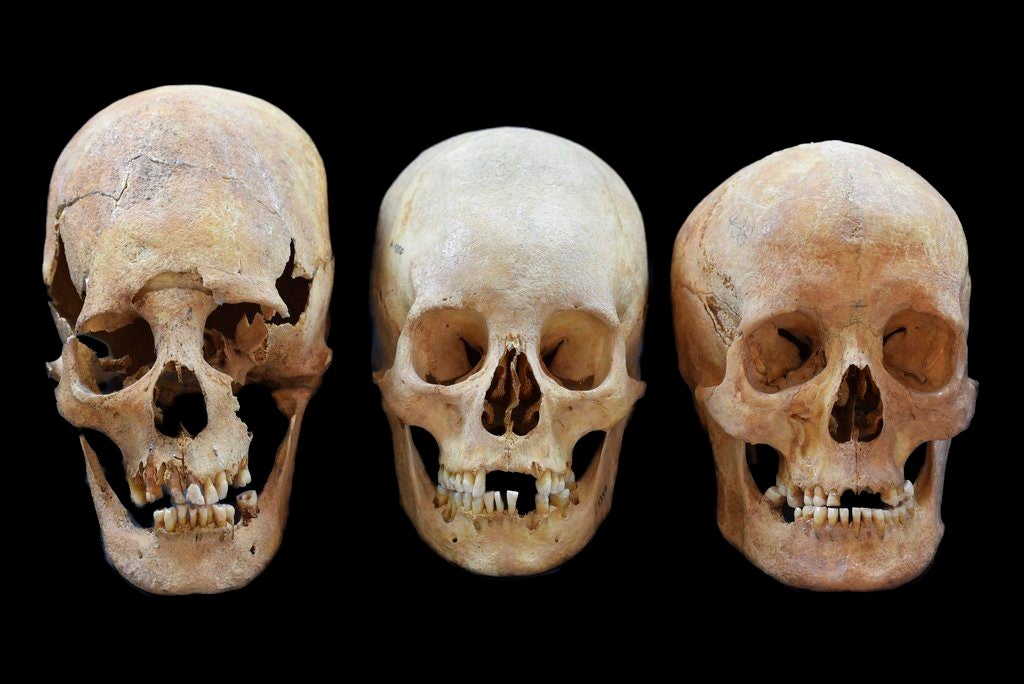 Undated photo provided by the State collection for Anthropology and Palaeoanatomy Munich shows strong, intermediate and non-deformed skulls, from left, from the Early Medieval sites Altenerding and Straubing in Bavaria, Germany. Scientists investigating unusual skulls found at dozens of 5th and 6th century burial sites say they appear to provide evidence of long-distance female migration at a time when the continent was being reshaped by the collapse of the Roman empire. (State collection for Anthropology and Palaeoanatomy Munich via AP)

BERLIN (AP) — The newcomers who arrived in the little farming villages of medieval Germany would have stood out: They had dark hair and tawny skin, spoke a different language and had remarkably tall heads.

Now scientists who investigated the unusually shaped skulls say they provide evidence that women also migrated long distances across medieval Europe, not just men. A genetic analysis showed the women traveled from what is now Romania, Bulgaria and northern Greece at a time when the continent was being reshaped by the collapse of the Roman Empire.

In a study published Monday by the Proceedings of the National Academy of Sciences, researchers say the women’s elongated heads — a result of binding done after birth — suggest they might have been high-class individuals.

“These women looked extremely different to the local women, very exotic if you will,” said one of the researchers, Joachim Burger, a population geneticist at the University of Mainz, Germany.

With colleagues from Europe and the United States, Burger compared the genetic profile of almost 40 human remains unearthed from 5th and 6th century burial sites in Bavaria, along the Isar and Danube rivers.

They expected to find the telltale signs of centuries of Roman presence in the area — soldiers from the Mediterranean leaving their genetic mark on the location population. Instead, it looked “very central or northern European — blond and fair-skinned, like modern-day Scandinavians,” Burger said.

The exception was a group with deformed skulls. Known from various cultures across the world, artificially elongated skulls may have been considered a form of beauty or denoted high status because of the time and effort required to bandage a child’s head, said Burger.

While the practice is often associated with the Huns who swept into Europe from the East during the 5th century, the genetic makeup of the women found in Bavaria showed little Asian ancestry, suggesting that either head binding had been adopted by people living in southeastern Europe or emerged there independently.

“This is a sound study with quite interesting results,” said Jean-Jacques Hublin of the Max Planck Institute for Evolutionary Anthropology in Leipzig, Germany. He had no role in the research. 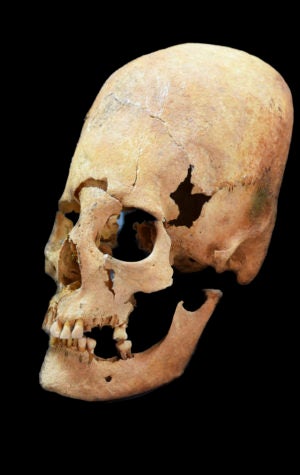 Photo provided by the State collection for Anthropology and Palaeoanatomy Munich shows an artificially deformed female skull from Altenerding, an Earyl Medieavel site in Bavaria., Germany. Scientists investigating unusual skulls found at dozens of 5th and 6th century burial sites say they appear to provide evidence of long-distance female migration at a time when the continent was being reshaped by the collapse of the Roman empire. (State collection for Anthropology and Palaeoanatomy Munich via AP)

While it’s unclear why the women — apparently without men — traveled such a long distance, the study’s authors speculate that they may have represented strategic alliances between distant populations across Europe.

“They must have come on purpose,” said Burger. “It’s not a single case, there are quite a few of them.”

Despite their foreign origins, the women integrated into Bavarian society, according to the researchers. They wore the same clothes as the locals and were buried with the same artifacts. Burger said further research is needed to see whether the women intermarried with the local population.   /muf