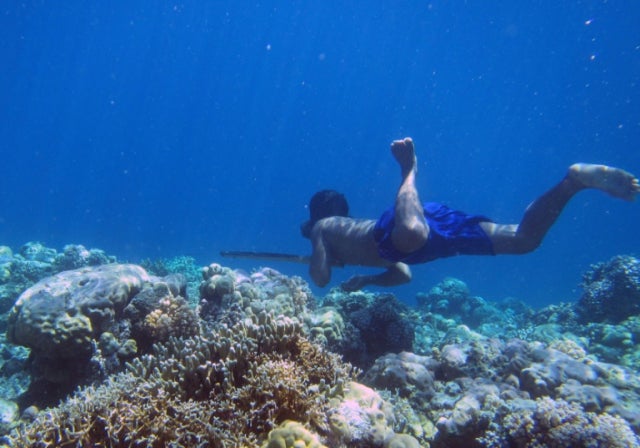 Researchers have discovered the first evidence that people can genetically adapt to deep diving, as shown by the unusually large spleens in indigenous people of Indonesia known as the “Sea Nomads,” a study said Thursday.

The spear-fishing Bajau people regularly free-dive to depths of up to 230 feet (70 meters), with only weights and a wooden mask.

They spend up to 60 percent of their work day diving for fish, spearing octopus and gathering crustaceans — an amount of time rivaled only by sea otters — and can stay underwater up to 13 minutes at a time, said the report in the journal Cell.

Intrigued by this unusual ability, American researcher Melissa Ilardo, then a post doctoral candidate at the Center for GeoGenetics at the University of Copenhagen, wondered if they had genetically adapted somehow to be able to spend more time underwater than other people.

She spent several months in Jaya Bakti, Indonesia, with the help of a translator, getting to know the Bajau and another nearby group that did not dive, the Saluan.

“I spent my whole first visit to Jaya Bakti introducing myself, the project, and the underlying science,” she told AFP.

“I wanted to be sure that they understood exactly what I was asking of them so they could help to direct the project to reflect their interests. They were very curious and excited about the research.”

Before her second visit, she learned some Indonesian in order to be able to communicate directly with the Bajau.

She took genetic samples and did ultrasound scans, which showed that Bajau had spleens about 50 percent larger than the Saluan.

Spleens are important in diving — and are also enlarged in some seals — because they release more oxygen into the blood when the body is under stress, or a person is holding their breath underwater.

Spleens were larger in the Balau people whether they were regular divers or not, and further analysis of their DNA revealed why.

Comparing the genomes of the Bajau to two different populations, the Saluan and the Han Chinese, scientists found 25 sites that differed significantly.

Among them was one site on a gene known as PDE10A, which was determined to be linked to the Bajau’s larger spleen size.

In mice, “PDE10A is known for regulating a thyroid hormone that controls spleen size, lending support for the idea that the Bajau might have evolved the spleen size necessary to sustain their long and frequent dives,’ said the study.

The findings could boost research in medicine by helping researchers understand how the body reacts to a loss of oxygen in various contexts, from diving to high-latitude climbing to surgery and lung disease.

“This really tells us how valuable and important indigenous populations are around the world that are living extreme lifestyles,” said co-author Eske Willerslev, a professor at the University of Copenhagen.

Willerslev admitted he initially urged Ilardo not to pursue the research for her PhD thesis, believing it was too risky and that she may find nothing.

“She said she wanted to do it anyway and that paid off. Melissa was right and our concerns were wrong.”

Ilardo said she was aware of the risks but “believed so strongly in this project,” that she had to push on.

“The Bajau and other Sea Nomads are simply extraordinary and I wanted to be able to prove that to the world,” said Ilardo, now a US National Institutes of Health postdoctoral scholar at the department of Molecular Medicine at the University of Utah. AB

TOPICS: Bajau, deep diving, Indonesia, Jaya Bakti, spleen
Read Next
WATCH: Alexa to teach ‘Call of Duty’ players better skills
EDITORS' PICK
BFP raises general alarm over Mandaluyong fire
Someone from the Philippines can become $356 Million richer this Tuesday
Cherry Mobile teams up with Cloud Panda PH, launches online store
Leveling up your ‘lutong bahay’ with the kitchen companion you never knew you needed
Bato de la Rosa, Risa Hontiveros back bill increasing female recruitment quota in PNP
Quarantine violations still punishable despite deleted provisions in ‘Bayanihan 2’ – Bato dela Rosa
MOST READ
‘If I had not been SolGen, I will make you eat your words,’ Calida tells Coco Martin
51 percent of German firms holding back investments in PH, but not because of COVID-19
Quarantine passes no longer required under GCQ, but curfew remains
5 car dealership outlets shutting down
Don't miss out on the latest news and information.