Scientists release most detailed star chart of the Milky Way 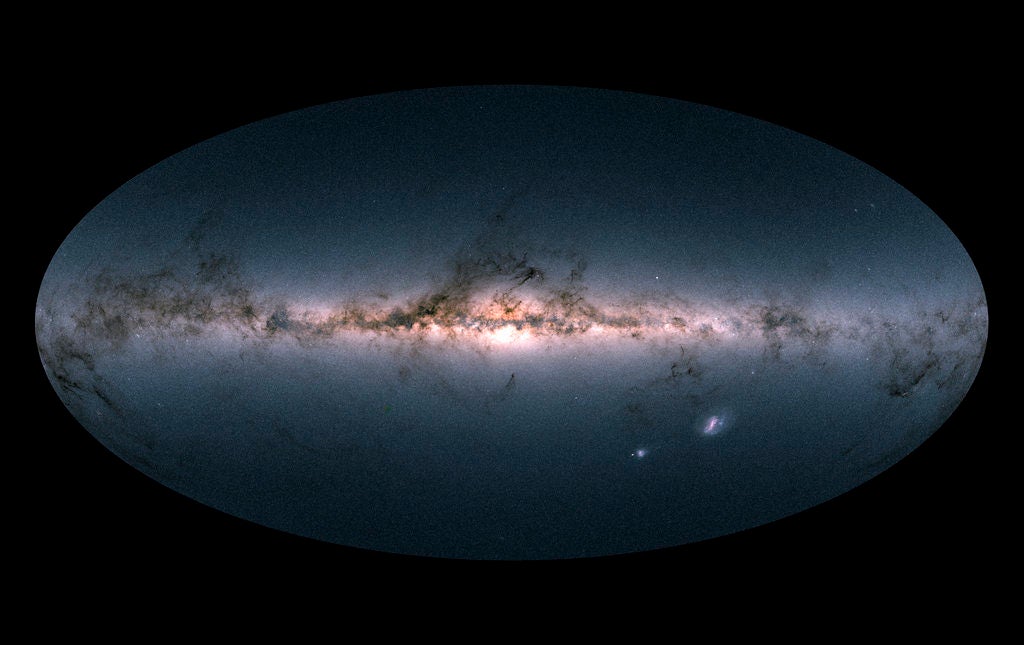 This image provided by the European Space Agency ESA, is Gaia’s all-sky view of our Milky Way Galaxy and neighboring galaxies, based on measurements of nearly 1.7 billion stars. The map shows the total brightness and colour of stars observed by the ESA satellite in each portion of the sky between July 2014 and May 2016. Image: ESA/AP)

BERLIN (AP) — The European Space Agency released the most accurate census yet of stars in the Milky Way and neighboring galaxies Wednesday, providing astronomers with a wealth of new data for further research.

The high-precision measurements about the distance, motion, brightness and color of almost 1.7 billion stars were collected by the space agency’s Gaia probe between July 2014 and May 2016.

Hundreds of scientists and software engineers took years to process the data and create a catalog of stars from which they were able to generate maps, including of the asteroids in our solar system and even a three-dimensional chart of some nearby stars.

Antonella Vallenari, one of the lead scientists involved in the project, said astronomers have gained new insights into the life cycle of stars and how the Milky Way was formed.

One theory supported by the observations is that our galaxy was struck by material from another, resulting in ‘ripples’ of stars moving in an unexpected way compared with the otherwise uniform motion of stars in the Milky Way, said Vallenari.

ESA said professional and amateur astronomers alike will be able to access the data and hunt for new discoveries. It’s the second release following the publication two years ago of a smaller batch of measurements covering 2 million stars.

Further data releases are planned in the coming years. AB

Spaceflight companies challenged to launch rockets within days, not years

Diamond from the sky may have come from ‘lost planet’ – study