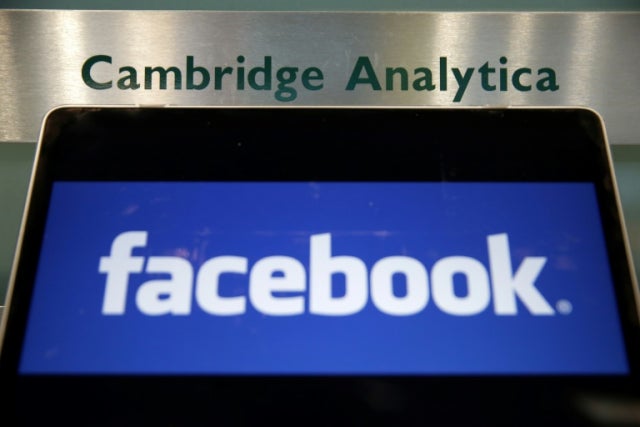 Cambridge Analytica, hired by Donald Trump’s presidential campaign, said it had been “vilified” in recent months over “numerous unfounded accusations”, which had decimated its business. Image: Daniel Leal-Olivas/AFP

Cambridge Analytica, the British marketing analytics firm, announced Wednesday that it was closing and would file for insolvency in Britain and the United States after failing to recover from the Facebook data scandal.

The decision follows weeks of intense pressure on the company, hired by Donald Trump’s presidential campaign, after allegations emerged it may have hijacked up to 87 million Facebook users’ data.

It claimed it has been “vilified” by the “numerous unfounded accusations” which torpedoed its business and left the firm with “no realistic alternative” but to go into administration.

“Despite Cambridge Analytica’s unwavering confidence that its employees have acted ethically and lawfully… the siege of media coverage has driven away virtually all of the company’s customers and suppliers,” it said in a statement.

“As a result, it has been determined that it is no longer viable to continue operating the business.”

An affiliate of British firm Strategic Communication Laboratories (SCL), CA has offices in London, New York, Washington, as well as Brazil and Malaysia.

It drew attention after former Trump chief strategist Steve Bannon reportedly once sat on its board and was bankrolled to the tune of $15 million (12.5 million euros)by US billionaire and Republican donor Robert Mercer.

It first became embroiled in scandal in March when Canadian whistleblower Christopher Wylie, a 28-year-old former analyst for the firm, revealed it had created psychological profiles of tens of millions of Facebook users via a personality prediction app.

The revelations instantly reverberated around the world, wiping billions from the social media giant’s market value and drawing scrutiny from politicians and regulators on both sides of the Atlantic.

To make matters worse for CA, CEO Alexander Nix was suspended within days after he was filmed by undercover reporters bragging about ways to win political campaigns, including through blackmail and honey traps.

As the crisis intensified, Facebook chief Mark Zuckerberg was forced to apologize to its billions of users amid a small but growing exodus from the site.

He eventually appeared before Congress for a two-day grilling by lawmakers, and has since vowed to overhaul the way Facebook shares its users’ data.

In Britain, regulators ratcheted up a probe into CA, raiding its London offices, and later extending the investigation to 30 organizations, including Facebook.

A second whistleblower from the firm also emerged at a parliamentary hearing in April claiming Britons’ personal data may have been misused by a pro-Brexit campaign ahead of the 2016 referendum in which Britain voted to leave the European Union.

Earlier this month, Facebook upped its count of the number of people impacted, admitting that up to 87 million users may have had their data harvested.

CA has vehemently denied exploiting that data for Trump’s election campaign, claiming it deleted data obtained in breach of the social network’s terms of service.

At a London press conference last week a CA spokesman claimed the company was “no Bond villain” and had broken no laws.

It hired British barrister Julian Malins to conduct an independent investigation into what it termed “a torrent of ill-informed and inaccurate speculation” and posted his report on its website Wednesday.

“(The) report… concluded that the allegations were not ‘borne out by the facts’,” CA said.

“(It) has been vilified for activities that are not only legal, but also widely accepted as a standard component of online advertising in both the political and commercial arenas,” it added.

But the company conceded the crisis had taken too heavy a toll and said its board had appointed lawyers in Britain to oversee the insolvency process, and would be following suit in America.

Initial reaction to the news in Britain was guarded.

Damian Collins MP, chair of a parliamentary committee that held the hearings on the issue and questioned Nix in February and Facebook executives last month, warned CA “cannot be allowed to delete their data history by closing”.

“The investigations into their work are vital,” he added. AB