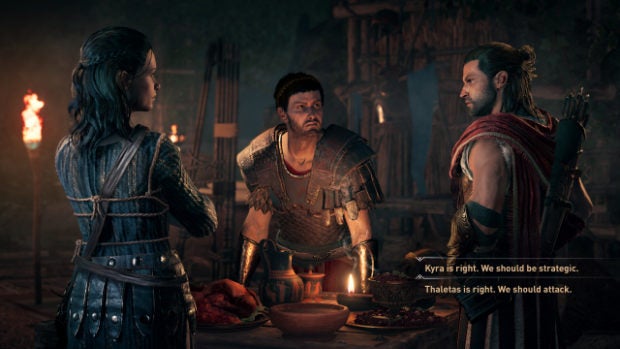 Ubisoft impressed with a quartet of big hitters during its E3 2018 showcase: Ancient Greek “Assassin’s Creed Odyssey,” a deeper look at “The Division 2,” vehicular playground “The Crew 2,” and an unexpected collaboration on “Beyond Good & Evil 2.”

Ahead of its E3 2018 presentation, Ubisoft’s quasi-historical action adventure “Assassin’s Creed Odyssey” was leaked courtesy of a branded keyring.

Set in Ancient Greece, thus several centuries before 2017’s “Assassin’s Creed Origins,” this October 2018 launch has acquired the look and form of an open-world role-playing adventure — a genre more usually associated with the expansive, epic-scale “Skyrim” and “The Witcher 3.”

As a male or female character, players can now direct the flow of conversations, experience the consequences of choices they made in terms of personal reputation and geopolitical events, and enter into companion relationships, as seen in an extended Gameplay Walkthrough Trailer.

Post-apocalyptic action game “The Division 2” is settling on Washington DC as its environment, and Ubisoft debuted two cinematics as bookends for its showcase segment.

Three significant updates were promised during the game’s first year of availability plus a deeper dedication to challenging veteran players in the game’s final stages and eight-person raids.

Multi-vehicular plaything “The Crew 2” only needed three minutes to set out its stall — two minutes of which were given over to a roaring trailer that demonstrated its high-octane mix of cars, motorbikes, boats and airplanes ahead of a June 29 launch and open beta debut from June 21.

And fans of “Beyond Good & Evil 2” got a new glimpse of its potential, confirmation of its prequel status, and a peek at the returning heroine of its 2006 predecessor in mysterious circumstances — though no release date as of yet.

There was also a montage of how the game might work under player control and news that it would be crowdsourcing some audio and visual assets through the Hit Record community. NVG