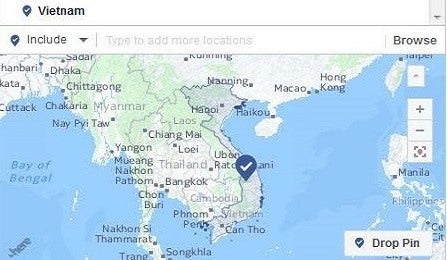 The social media site responded by saying it had been made aware of the issue and added the problem had been caused by the use of a “wrong” map for geographical reference.

Le Quang Tu Do, deputy head of the Authority of Broadcasting and Electronic Information under the Mínistry of Information and Telecommunications, said when discovering the East Sea (South China Sea) islands were marked as Chinese on Facebook’s Boost Page feature, a complaint was lodged by the Government.

The social media site responded by saying it had been made aware of the issue and added the problem had been caused by the use of a “wrong” map for geographical reference.

Quang added that Facebook also said it was looking into the issue and promised a resolution.

As of yesterday afternoon, on the Facebook map, the two islands were no longer marked as Chinese.

“It can be said that this is one success for Vietnam in fighting for its national sovereignty,” Do said.

Vietnam has consistently stressed it has sufficient legal ground and historical evidence affirming its sovereignty over Hoang Sa and Truong Sa archipelagoes, as well as legitimate rights over its waters in line with the 1982 United Nations Convention on the Law of the Sea.