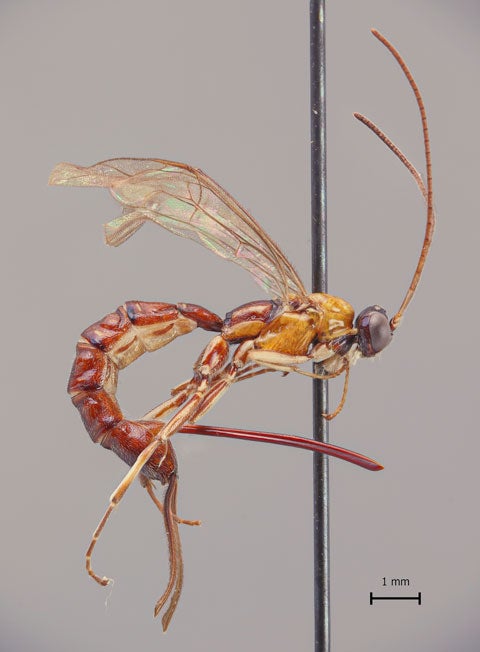 Researchers discovered an Amazonian wasp with a giant stinger used for injecting venom and eggs into its victims.

The team from the University of Turku, Finland, partnered with colleagues from Colombia, Spain and Venezuela to discover several wasp species previously unknown to science. One of these they named Clistopyga crassicaudata, according to a statement.

Although wasps laying eggs in spiders is nothing new to scientists, this was the first time they encountered a wasp with such a large, dual-purpose stinger.

Discovered in the western Amazonia, the parasitoid wasp likes to look for spiders in their nests. Clistopyga crassicaudata would then sting the spider and paralyze it with venom. While the spider remains paralyzed, the wasp would lay its eggs on it through the large stinger. Most parasitoid wasps have a long organ called the ovipositor, which helps them place eggs into or on their prey. The wasp larvae would later eat the spider from the inside including any eggs or hatchlings available in the nest.

Ilari E. Sääksjärvi of the University of Turku, a professor in biodiversity research, said they were still studying which spiders the new parasitoid wasp prefers. Sääksjärvi speculates the large stinger may have another use other than delivering venom and eggs. A paper on their study has been published in the journal Zootaxa.  /ra