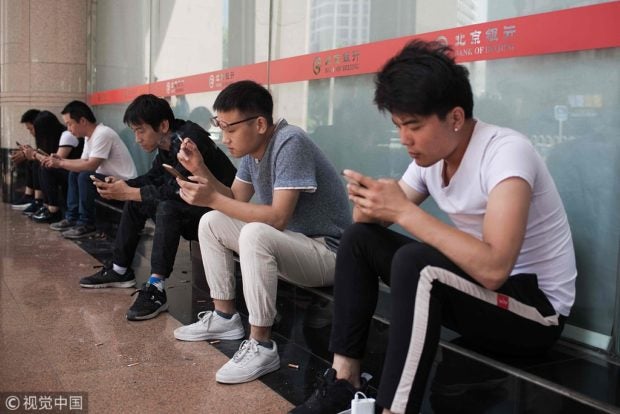 People use their mobile phones outside an office building in Beijing on May 24, 2018. [Photo/VCG]

BEIJING — Chinese netizens regard smartphone social applications as a daily requirement, and most of them spend more than one hour a day using them, according to an internet development report.

The report, released by the Internet Society of China and China Internet Network Information Centre on Thursday, said that the country had 772 million netizens as of the end of last year, and 753 million of those use smartphones to surf the internet.

Of these mobile netizens, half open smartphone social applications more than three times a day, and more than 80 per cent of them spend more than one hour on the apps every day, the report said.

It added that the average Chinese netizen spends 27 hours a week online.

Jia Zhu, 31, who works for a fashion company in Beijing, told China Daily that she follows businesses and reads her WeChat almost 18 hours a day.

“It’s no exaggeration. I have to say sometimes I can only put my phone down when I’m sleeping,” she said. She uses WeChat the most and also spends time on its moments, but she noted that the reason she opens the app is to contact family, colleagues and clients.

“I once thought I could leave the social apps at some point, but I found it so hard,” she said. “Most of the news I get is from the apps. If I give them up, I may miss what’s going on.”

Kong Yiying, 30, an employee of a fishing company in Guangzhou, Guangdong province, said she can control her time online, especially on social apps.

“I surf the internet via computer during weekdays, and spend less than an hour on the smartphone after getting home,” she said.

“I use my smartphone to order food and buy some daily necessities, which doesn’t take much time online,” she said, adding that self discipline helps her avoid addiction to the social apps.

The report also said that 531 million netizens chose to pay for things online last year, 56.6 million more than than in 2016. It added that 7.18 trillion yuan ($1.1 trillion) was spent in the online shopping marketplace in China last year, up 32 per cent year-on-year.