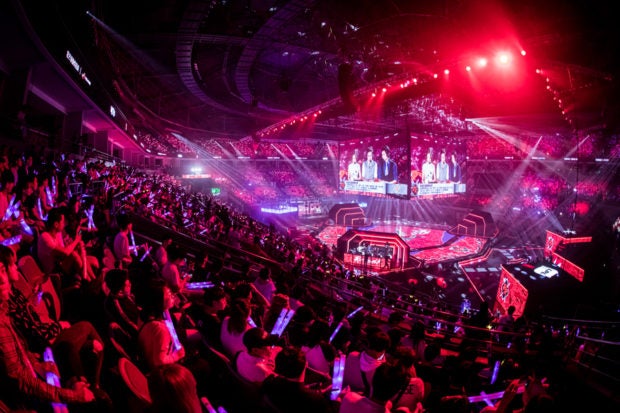 More than 20,000 fans cheer games in the League of Legends Pro League, China’s top professional league for LOL, at the Dalian Sports Center Stadium in Dalian, Liaoning province, where the Chinese league claimed the regional championship by defeating the league from South Korea 3-2 on July 8. CHINA DAILY

BEIJING — The roar generated by more than 20,000 fans at the Dalian Sports Centre Stadium and the cheers of 18,000 at Shanghai’s Mercedes-Benz Arena on the same day stand as firm evidence of the progress of e-sports development in China.

The fans were attending two major events on July 8 that showcased the dawning of a new era for the country’s e-sports players.

In Dalian, Liaoning province, the event was the League of Legends Rift Rivals, a regional e-sports tournament based on one of the world’s most popular PC games, LOL. In Shanghai, it was the Spring Season Final of the 2018 King Pro League, an e-sports competition based on Tencent’s mobile game hit King of Glory.

Staged soon after Chinese e-sports team Royal Never Give Up was crowned world champion at the LOL Mid-Season Invitational in Paris in May, the enthusiasm shown on July 8 once again demonstrated the strength of China’s growing e-sports and booming gaming industry.

In Shanghai, two of China’s most competitive King of Glory clubs, EDward Gaming and Hero, competed against each other to find the country’s best. The Hero team, which made it to the season’s final for the first time, won the championship 4-1.

No matter the winner, the two events showed just how popular esports has become in China, attracting a total of 38,000 spectators. Still, this figure is just a tiny fraction of the country’s e-sports fans.

According to the League of Legends Pro League, live broadcasts of its games were viewed more than 7 billion times by Chinese fans in the first half of this year, with the total time they spent watching games reaching 1.38 billion hours.

To allow fans a closer connection with their gaming idols, the league also introduced a home-and-away system for its clubs, similar to traditional sports leagues such as the National Basketball Association in North America.

The average demand for seats at the five home stadiums has reached more than 90 per cent, and the league is working to select home venues for all the clubs, prompting interest from many Chinese cities willing to provide preferential policies to support these clubs.

The situation is also promising for the King Pro League. King of Glory has attracted 200 million registered users since its launch in 2015, and live broadcasts from the league, which was formed in 2016, were watched more than 10.3 billion times last year with total prize money of 6.85 million yuan ($1 million).

The broadcasts and other content from the league’s Spring Season this year have been viewed more than 4 billion times, a 42 percent year-on-year rise, with daily viewership of league games reaching 34 million.

China’s e-sports market value reached 5 billion yuan last year and this will grow to 8.48 billion yuan this year, according to the 2018 China E-sports Development Report.

North America and China are the two major pillars of the global e-sports industry, accounting for 37 per cent and 15 per cent of the market respectively, according to the report.

In 2016, China’s e-sports income growth rate hit 56 per cent, 4 percent higher than the global average, and the industry has reacted accordingly.

“We have been paying close attention to the development of e-sports in our country,” said Li Jian, a Ministry of Culture and Tourism official, at the Global E-sports Leaders Summit.

“In recent years, the market scale, market value, users and tournament prize money of Chinese e-sports have all been skyrocketing, attracting the attention of the government and other interested parties.”

However, the booming market faces a number of challenges.

“Many local governments have different preferential policies, but there are no unified plans to support e-sports’ development,” Li said. “Also, the industry chain of our country’s e-sports is incomplete and the long-term profit model is immature. More important, the industry needs to be properly regulated.”

Wei Jizhong, Olympic Council of Asia honorary president, said: “The rising prise money could be a problem. If the prize money is too high, the whole sport could become too profit-driven, which would not be good news.”

For Chinese e-sports, the progress made this year is a dream come true.

The highlight has been the milestone creation of a national team, with e-sports included as a demonstration sport at the 2018 Asian Games in Jakarta.

The decision was made last year, and in May the Asian E-sports Federation announced the six games to be used in Jakarta. The Games open on August 18 and run for two weeks.

“Adding e-sports to the Asian Games was much tougher than we thought,” said Wei, the Olympic official who successfully pushed for the inclusion. “After long negotiations, we agreed on three principles－no violence, making sports games a priority and guaranteeing fairness.”

“It’s only a demonstration sport now, but we are trying to make it an official medal sport for the 2022 Asian Games. E-sports is a popular trend among young people. We can never cut this connection with the young.”

The Chinese team was formed to compete in three games: LOL, Arena of Valor and Clash Royale.

The team boasts Jian Zihao, also known as Uzi, one of the world’s best LOL players, and three other members of world-renowned Chinese club RNG, so the LOL squad of Team China is expected to win a gold medal.

With Arena of Valor developed in China and members of the AOV unit of Team China all top players in China’s King Pro League, the country is also determined to pocket another gold.

However, that will not be easy, especially for the Arena of Valor squad, as the international version of the game has many modifications compared with the domestic King of Glory.

All three Team China squads have qualified for the Asian Games, with the LOL squad ranking third and the Arena of Valor squad second in the qualifying competitions, which attracted 27 countries and regions.

Zhang Yuchen, aka Lao Shuai, a member of the Arena of Valor squad and a professional player in the King Pro League, said: “When we finally qualified for the Asian Games, it was a huge relief for me. It’s a very special experience for me to fight for our country and train with other members of the national team.”

Liu Jieming, aka KU, another member of the national Arena of Valor squad agreed, saying, “We knew that the e-sports strengths of many countries such as South Korea were very strong, but at Arena of Valor we will never to lose one inch of our land.”

Although the value of China’s esports’ market is huge, the industry desperately needs more talent. With no shortage of gamers, it has many other vacancies waiting to be filled.

There are an estimated 260,000 vacancies in the domestic e-sports industry, according to a university e-sports development report published by the Network Film and TV Centre of the Chinese Communist Youth League in May.

However, the jobs do not involve playing games. Authorities are trying to nurture professional game designers, coaches, tournament mangers and e-sports live broadcasters.

The report also announced the launch of the Chinese University E-sports League to help further boost the healthy development of e-sports, especially at university level. Through the national e-sports league, the Youth League plans to nurture and regulate the emergence of more e-sports clubs at universities and create more job opportunities in the sector.

According to the 2018 China E-sports Development Report, 32.6 per cent of e-sports users in China are willing to work in the industry, and 24 per cent of the users who are parents support their children in finding jobs associated with e-sports.

According to the report, 32.3 percent of people want to work on live-broadcast platforms for e-sports, 31.9 percent have chosen to work in e-sports clubs, and 23.7 per cent want to work as game designers. However, only 19.9 percent want to become professional gamers. To fill the positions, universities across China have work to do.

In September 2016, the Ministry of Education listed “e-sports and management” as a college major, paving the way for higher education institutes to offer related courses and diplomas.

Among the universities offering e-sports classes, Peking University has received the most attention. Chen Jiang, associate professor at the university’s School of Electronics Engineering and Computer Science, started an e-sports class in the spring semester.

Chen said the course is not a gaming training camp, but includes in-depth study of the gaming industry, game designs and user experience.

“When I prepared the class before the semester, I did a lot of research on how foreign universities have incorporated e-sports courses,” Chen said. “A typical example is the University of Southern California, one of the best universities in the United States. Students there can earn around 14 academic degrees at different levels associated with games and e-sports, including game design.”

Chinese tech giant Tencent has also been helping to nurture more talent by working with schools and different organizations and universities, including Communication University of China, which added an e-sports-dedicated subject－digital media art－last year. It is also one of the first schools in China to offer degrees in game design.

Mars Hou, a senior manager with Tencent Interactive Entertainment, said, “E-sports education is a very new area for everyone, and like many new subjects, the industry’s development has already gone beyond academic studies.

“Tencent E-sports has been building a system, including academic education, that offers diplomas, professional training and general education for the public. On the one hand, there is a desperate need for talent. On the other hand, we can never rush it. Education is rigorous, which needs patience.”