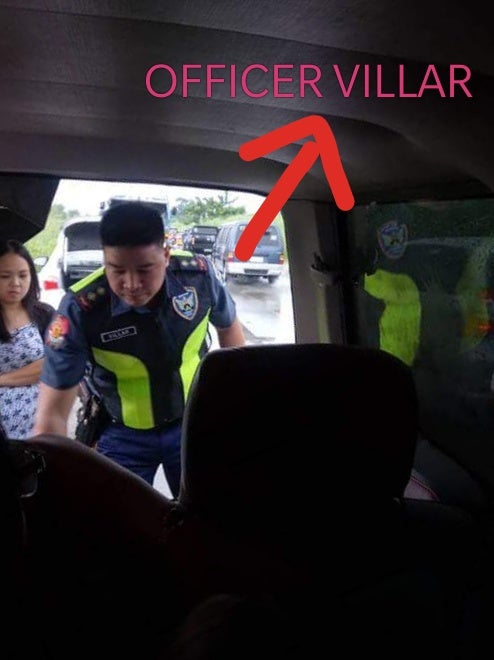 A photo of Officer Villar. Photo courtesy of Kelvin Pacelo

Superheroes do not always wear capes and put the safety of people before theirs. Some are uniformed men who help out in changing tires — on the road, during a rainy day.

Kelvin Pacelo and his family were on their way to a wedding in Quezon City on a rainy Sunday when one of their tires went flat. 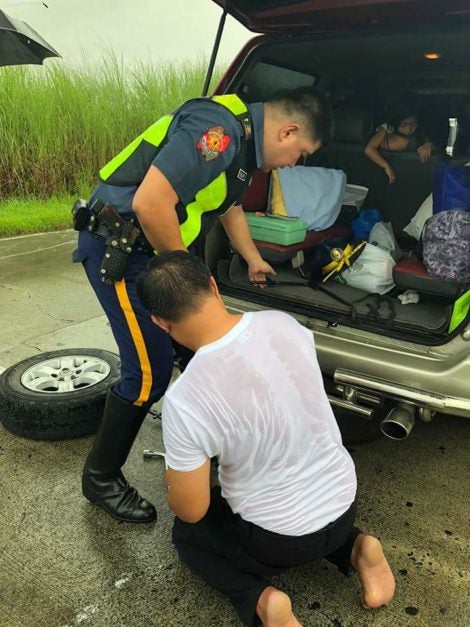 “It’s very unfortunate for my family since it was raining hard, I had fever,  and obviously we were in wedding attires,” Pacelo wrote on his Facebook post.

“With God’s grace, two police officers pulled over and assisted us,” he continued.

One of the policemen, who is a former vulcanizer, helped Pacelo’s father in changing the tire, while the other helped control the traffic flow.

“Without them, it would [have been] impossible for us to change the flat tire since my dad’s jack was jammed (check your tools),” he wrote.

“Yep! They lent us their hands and jack. We all got soaking wet thereafter,” Pacelo added.

In awe of the policemen’s kind gesture, a passer-by tried handing the men P500 since he found the scene heartwarming, but they declined. 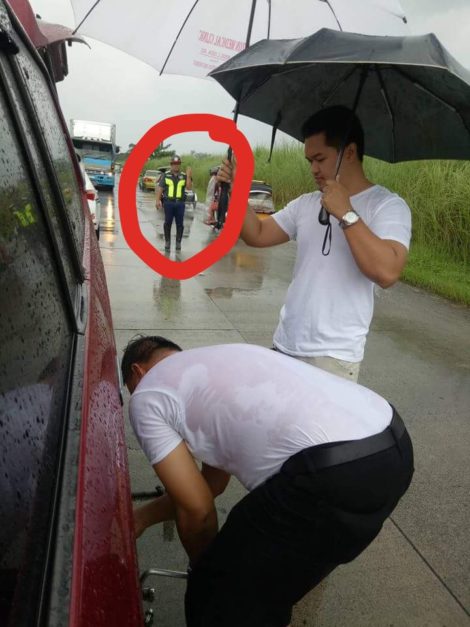 “The guy was insisting but the police officers rejected his offer, because according to them, they’re just trying to help us,” Pacelo said.

“Of course, my family and the people caught in traffic, who noticed this unfortunate event-turned-heart-warming experience – were in deep awe, since we [have] never heard of or seen police officers fixing flat tires,” he added.

A realization that there are still good policemen dawned on them after the incident since what is seen by many, more often than not, are the ugly parts of the profession, he wrote.

“You couldn’t blame us for that realization, because most of us see only the negative sides of police officers on media: Them being fired because of sleeping when in duty, them being jailed because of being corrupt, them being ‘kotong cops,’ them being the target of Human Rights Violations, etc,” Pacelo expounded.

He said that he shared the stories to give light to the good sides of the men in uniform, and said that the next time they encounter policemen they would not be wary of being reprimanded. 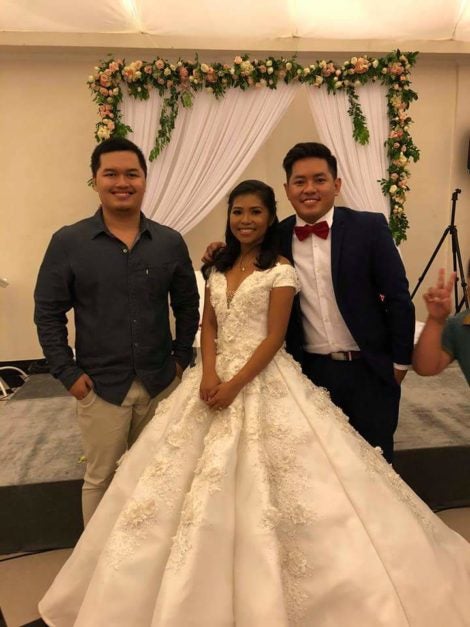 Pacelo poses with the newlyweds after arriving safely to the event. Photo courtesy of Kelvin Pacelo

“Instead, we would smile and remember how these police officers helped us without asking anything in return,” Pacelo said.

“From my whole family, we thank you for your simple act of kindness. Snappy salute to Officer (Michael) Villar and his partner. Sana po makaabot sa inyo ang aming pasasalamat,” he added.

(I hope this gratitude will reach you.)

He explained that he failed to get the name of the other policeman because aside from the fact that it was raining heavily, he was far from the cop who took charge of the traffic.

In a Facebook chat, Pacelo said he did not post the story to make  it viral, but when it did anyway, he felt delighted for the police officers.

“Because as you can see on the comments section, people aren’t used to hearing good stories about them,” he said.

It may be recalled that on Wednesday afternoon, a viral video of SPO1 Edmar Costo, who slapped a bus driver in Baclaran, Pasay City also went viral.

Costo was relieved from his post on Thursday, according to the Southern Police District and the National Capital Region Police Office.