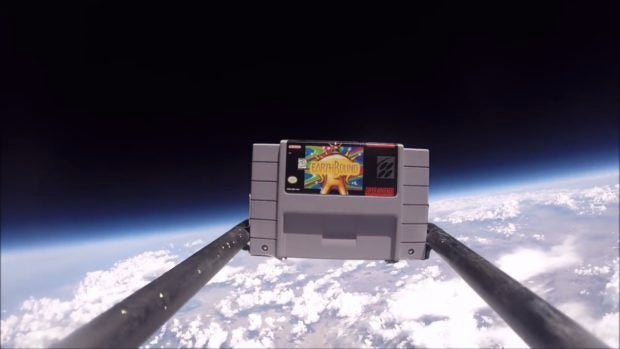 A video game collector commissioned a balloon flight to send the retro game cartridge of “EarthBound” to “the edge of space.”

The collector, Ronnie Doyle, made a donation to the crowdfunded science group called Earth To Sky Calculus, to send his $200 (around P10,500) game cartridge of the Super Nintendo Entertainment System title “EarthBound” 100,000 feet up into a region of the atmosphere often referred to as “the edge of space.”

The group, composed of high schoolers and their teacher, attached the cartridge to a helium balloon and included a camera to record the journey.

It didn’t take long for the cartridge to go up in the air and fall back down to earth, as shown in the seven-minute footage uploaded on the YouTube channel Krazy Contraptions, on Aug. 7.

Since the cartridge was fairly expensive, the group attached a GPS tracker to locate it as soon as it landed. Surprisingly, the game still ran normally after taking a quick trip into space, as reported by Kotaku.

“EarthBound” was released in the American video game market in 1995 but failed to gain popularity during its time. Critics noted its “poor” graphic quality in a time when role-playing game classics like “Final Fantasy VI” and “Chrono Triger” were the benchmarks. However, contemporary game reviews praised “EarthBound” for its originality and often rated it highly. Alfred Bayle/JB