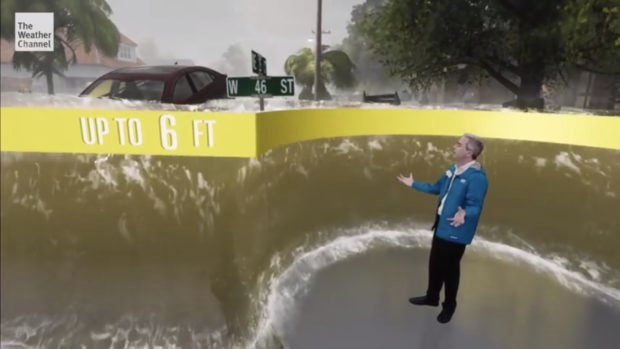 The Weather Channel made the most of technology to properly warn viewers of the dangers of rising floodwaters with some game-quality graphics on mixed reality.

The short video uploaded on Sept. 12 on The Weather Channel’s YouTube account gave a brief explanation of what could happen in a storm surge. It was made in light of the hurricane Florence’s arrival at the Carolina coast.

Unless someone has personally seen a flooded neighborhood, it may be difficult to imagine how it would look like under nine feet of water. That’s where the computer-generated graphics, powered by the game development platform Unreal Engine, came in, as reported by The Verge.

As meteorologist Greg Postel continued his explanation, virtual floodwaters began to build up around him. At three feet deep, it already became easy to picture how one would be sloshing through the waist-deep waters. At six feet deep, the wall of water around Postel looked menacing, and the added wind effects brought by the hurricane made the image even more dire-looking. At nine feet deep, the image of being submerged in raging waters became all too clear. It sent the message that no person should be caught in this deluge.

The use of gaming technology and mixed reality in this presentation helped to send a clearer image of danger compared with the traditional charts and graphs.

On another note, the technology’s ability to paint a clearer picture with believable graphics could also be adapted to other uses such as education and design.  /ra