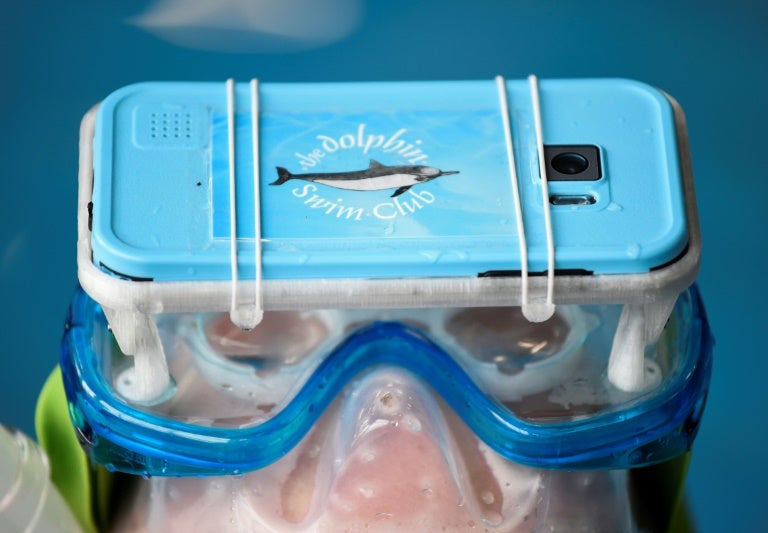 The VR glasses allow people to float around a pool watching dolphins playing around them in virtual reality, helping people relax and enter another world. Image: John Thys/AFP

Swimming with wild dolphins is something most can only dream of, and jumping into pools with captive animals has become increasingly controversial with environmentalists condemning it as cruel.

But a Dutch non-profit believes it has found a way to bring people, especially the disabled, closer to such a joyful experience through the technological, immersive advances offered by virtual reality (VR).

The Dolphin Swim Club is the realization of a more than two-decade journey by artist Marijke Sjollema, who had her first chance encounter with a dolphin in 1993 while snorkeling off the coast of Mexico.

“I saw this grey shadow under the water and my first thought was this is the end. I thought it was a shark,” she told AFP.

She tried to stay calm “but this shadow was following me. And then there was this split second that I realized that it wasn’t a shark. It was a dolphin.”

“I didn’t know anything about dolphins, but I instinctively knew, ‘Oh a dolphin, I’m fine. This is a good thing’.”

From that moment on, Sjollema’s love of dolphins and all cetaceans was born.

“We know that there is something magical about dolphins. We think of joy, and playfulness and happiness and innocence when we meet dolphins. And this is even a healing quality,” she told AFP.

She and her business consultant husband, Benno Brada, have devoted their spare time, energy and personal resources to their mission of enabling people to discover their own encounter with dolphins. 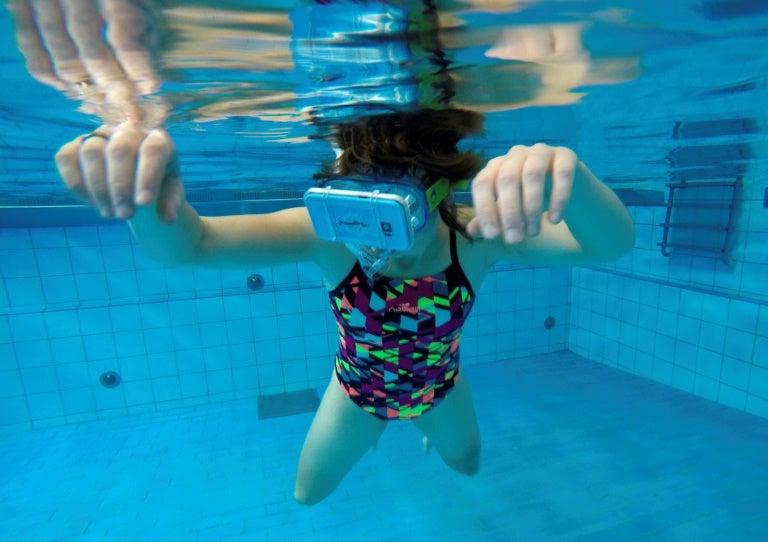 A Dutch non-profit has developed virtual reality glasses to enable the disabled to feel close to dolphins for therapeutic purposes. Image: John Thys/AFP

Their first project using normal VR headsets playing a film of the dolphins launched in late 2015.

But last month they went a step further, unveiling waterproof VR glasses, which allow people to drift around a pool watching bottlenose and spinner dolphins playing around them in virtual reality.

This VR dolphin therapy in a pool, still at the trial stage, is thought to be a world first.

“The dream was to find an alternative to dolphin-assisted therapies using dolphins in captivity,” Brada told therapists at a residential community for disabled people run by the ‘s Heeren Loo organization who were testing out the waterproof goggles in the pool.

The center has been using the land version of the VR glasses since 2016, and has seen noticeable benefits.

“Some 82 percent of our clients feel actually relaxed by seeing the films,” said the organization’s policy advisor Johan Elbers.

“It takes them away from the world they are in, they enter a new world in another mindset, think differently, feel differently, see differently, and relax completely.”

He recalled how one young woman, who had long had trouble sleeping, now watches a VR film of the dolphins swimming at night, and falls quietly asleep.

Another man is able to completely forget an agonizing pain in his arm.

Dion, a 21-year-old resident of the community, said watching the film made him feel “peaceful.”

“The dolphin noises and the water calms me down, that calms me from all the noises that there are, then you’re zen,” he said.

The pool-safe VR goggles, developed thanks to 50,000 euros ($59,000) grant from the Dutch government, consist of a waterproof Samsung smartphone in a waterproof backing mounted on a special 3D-printed rig made of recycled plastics.

“Stress is very important as a driver of all kinds of psychiatric problems,” explains psychiatrist Wim Veling, from the University of Groningen.

“So we are trying in therapy to make people more relaxed,” said Veling, who has been studying the use of VR to help people with mental health disorders.

“The power of virtual reality is in the immersion” into another world, he says on the Dolphin Swim Club site.

For Sjollema, the VR glasses offer huge advantages. Not only can they bring the dolphins to disabled people, who would not be able to travel to see them, but they also avoid the use of captive dolphins.

“Right from the beginning we wanted to make this an alternative for existing therapies with dolphins in captivity,” she said.

The films were made during a 10-day shoot in December 2015 at the Red Sea, by a specialist VR team Viemr, using free divers capable of holding their breath for up to five minutes so as not to scare away the dolphins.

The dry version glasses are already being used in more than 150 universities, hospitals and community centres around the world.

And the hope is that the waterproof ones will prove equally beneficial. Sjollema and Brada are looking for a partner to launch their commercial production.

But Dion is ready for something a little more exhilarating.

He would like to watch “a film with sharks” or lions “where the animal is hunting a prey. It would be fun to see a little bit of action.” AB