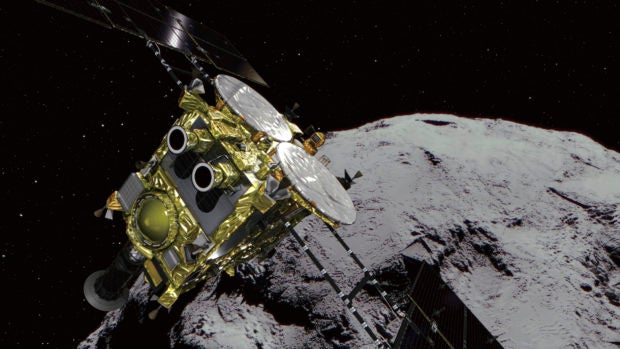 This computer graphics image provided by the Japan Aerospace Exploration Agency (JAXA) shows an asteroid and asteroid explorer Hayabusa2. The Japanese space explorer that will try to blow a crater in an asteroid and bring back samples from inside is nearing its destination after a 3 1/2 -year journey. The unmanned Hayabusa2 has arrived at the asteroid Wednesday, June 27, 2018, about 280 million kilometers (170 million miles) from Earth.(JAXA via AP)

TOKYO — A Japanese spacecraft has released two small exploration robots on an asteroid in a research effort that may provide clues to the origin of the solar system.

The Japan Aerospace Exploration Agency (JAXA) said the two Minerva-II-1 rovers were lowered from the unmanned spacecraft Hayabusa2 to the asteroid Ryugu. The spacecraft arrived near the asteroid, about 280 million kilometers (170 million miles) from Earth, in June.

JAXA said confirmation of the robots’ touchdown has to wait until it receives data from them on Saturday.

The two robots will capture images of the asteroid and measure temperatures before a larger rover is released in early October. The robots move by hopping because extremely weak gravity makes rolling difficult.