How internet usage has grown in Asia since 2000 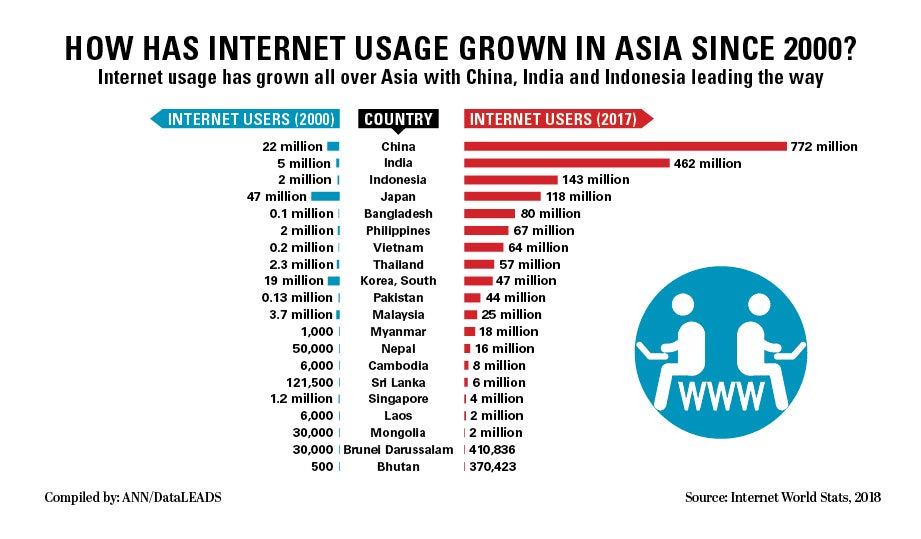 NEW DELHI – Internet usage has grown all over Asia with China, India and Indonesia leading the way, according to recent data released by the Internet World Stats.

The internet has grown widely in all parts of the world in what is termed as the digital age. Asia has shown impressive growth trends in the last ten years. South East Asia has seen the most penetration with China leading the way. In the last decade China has grown tremendously by providing internet from 22 million people to 772 million people in the last decade. China’s internet availability rate has reached 55.8 percent, exceeding the world average by 4.1 percentage points.

In Bangladesh, Philippines and Vietnam 80 million, 67 million and 64 million people respectively have access to internet.  Thailand has made internet available to 57 million people in the last ten years.

South Korea was second to Japan in the year 2000 with internet availability to 19 million people. The internet has now reached 47 million people by last year end.

Pakistan has improved considerably from providing access to 0.13 million people a decade ago to 44 million by the end of last year. Malaysia, Nepal and Myanmar have made internet available to 25 million, 18 million and 16 million people respectively by 2017.

Even with these impressive numbers, level of connectivity still has to improve considerably especially in South Asia. There are many challenges in terms of infrastructure, affordable devices, data plans and digital literacy that need to be overcome.