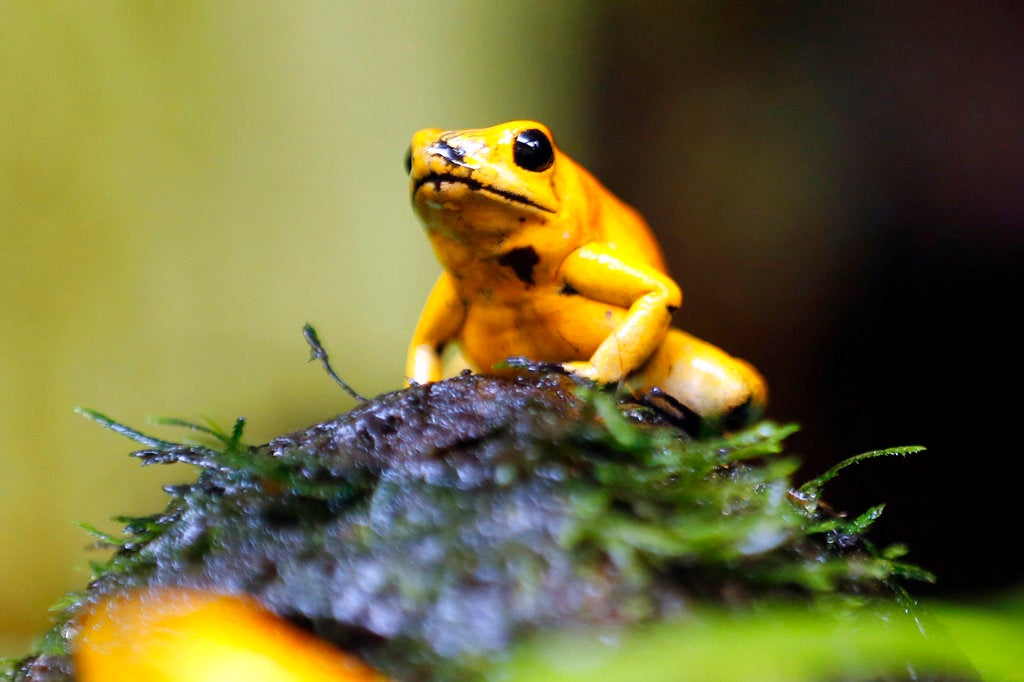 In this Oct. 4, 2018 photo, a golden poison frog is seen inside terrarium at the Biopark “La Reserva” in Cota, Colombia. According to Ivan Lozano the owner of Biopark this frog is one of the most toxic on the planet. (AP Photo/Fernando Vergara)

BOGOTA, Colombia — On the outskirts of Colombia’s capital red macaws share a nature reserve with ocelots and black-headed parrots. A white-crested harpy eagle whistles at schoolchildren who walk on a well-preserved trail.

The animals come from different regions of this ecologically diverse South American country. But most of them share one thing in common: They were rescued from animal traffickers.

As leaders in the fight against wildlife trafficking gather in London this week at the Illegal Wildlife Trade Conference, conservationists around the world are working to provide shelters to the thousands of animals that have been rescued from smugglers.

The Bio Parque La Reserva in the Colombian city of Cota is home to 50 species ranging from turtles to golden poison frogs, which are sought by collectors for their rare color.

Ivan Lozano, the reserve’s director, said his organization helps formerly trafficked animals recover from their injuries and reintroduces some of them into the wild. But it also uses animals that can no longer live in their original habitats to teach visitors about different species and their role in the ecosystem.

“Our idea here is to change the behavior of younger generations toward these animals” Lozano said.

To achieve this goal the Bioparque reserve opens its doors to hundreds of tourists and schoolchildren each week, for a fee of $6. Only guided visits led by the park’s experts are allowed.

While Colombia lacks well-known species like rhinos or elephants that make world animal-trafficking headlines, the country is strongly affected by the trafficking of exotic snakes, parrots, frogs and three-toed sloths.

More than 23,000 animals were confiscated in Colombia from traffickers last year, and smuggling is a serious threat to species like the golden poison frog.

Lozano believes that education is one of the keys to reducing animal trafficking and that is why he has opened his reserve to visitors.

“We want people to realize that they too have a role in reducing the loss of our biodiversity” he said. “And we want to make scientific discourse more accessible.” /muf