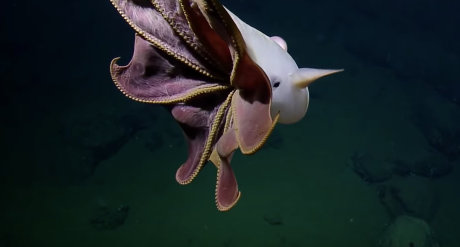 The crew aboard the Ocean Exploration Trust’s E/V (exploration vehicle) Nautilus spotted a cirrate octopod, Grimpoteuthis, commonly known as umbrella or dumbo octopus, gliding by the deep-sea camera in the depths of the Monterey Bay National Marine Sanctuary in California, United States on Oct. 23.

The creature was spotted during the first dive of the E/V Nautilus expedition to explore Davidson Seamount in Monterey Bay National Marine Sanctuary. The video of the umbrella octopus was uploaded on YouTube on the same day.

“At first the ghostly octopod drifted past the camera on remotely operated vehicle (ROV) Hercules flapping its pair of wing-like fins, then it inverted its web, spreading it like an umbrella to reveal the eight arms each with a single series of suckers and two series of finger-like muscular structures called cirri (hence the name cirrate octopod),” the Ocean Exploration Trust stated.

The commentary heard in this footage is from the research team aboard the Nautilus, comprised of scientists, ROV pilots, a navigator, a data logger, a video engineer and a science communicator.

“This first dive explored a completely unexplored rocky outcropping to the southeast of the seamount, a region known as an oasis in the deep with vast coral and sponge fields,” the Trust said. KM

Pink octopus so cute it may be named ‘adorabilis’