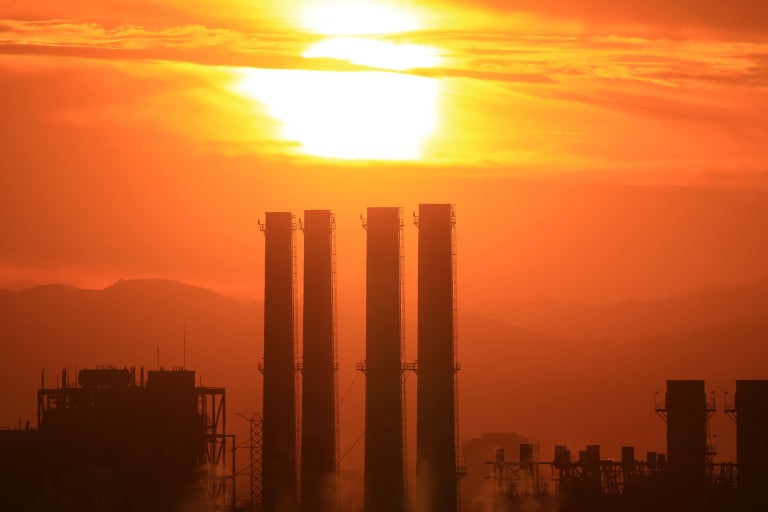 Since industrialisation took off in the early 19th century, CO2 concentrations in the atmosphere have increased by nearly half, from 280 parts per million to 407 parts per million. © AFP PHOTO/ David McNew/Getty Images

GENEVA – The levels of greenhouse gases in the atmosphere, the main driver of climate change, have hit a new record high, the United Nations said Thursday, warning that the time to act was running out.

Ahead of the COP 24 climate summit in Poland next month, top United Nations officials are again trying to raise the pressure on governments to meet the pledge of limiting warming to the less than two degrees Celsius, enshrined in the 2015 Paris accord.

“Without rapid cuts in CO2 and other greenhouse gases, climate change will have increasingly destructive and irreversible impacts on life on Earth,” the head of the World Meteorological Organization (WMO) Petteri Taalas said in a statement.

“The window of opportunity for action is almost closed,” Taalas also said.

In an open letter to all states ahead of COP24, UN rights chief Michelle Bachelet warned of cataclysmic consequences if the world does not reverse course.

“Entire nations, ecosystems, peoples and ways of life could simply cease to exist,” she said, citing evidence that nations are not on track to meet the commitments made in Paris.

US President Donald Trump, who pulled his government out of the Paris agreement, again on Thursday appeared to cast doubt on climate science.

“Brutal and Extended Cold Blast could shatter ALL RECORDS – Whatever happened to Global Warming?” he said in a tweet.

The Greenhouse Gas Bulletin, the UN weather agency’s annual flagship report, tracks the content of dangerous gases in the atmosphere since 1750.

This year’s report, which covers data for 2017, puts the concentration of CO2 in the atmosphere at 405.5 parts per million (ppm).

“The last time the Earth experienced a comparable concentration of CO2 was 3-5 million years ago, when the temperature was 2-3°C warmer,” Taalas said.

Researchers have made reliable estimates of C02 concentrations rates going back 800,000 years using air bubbles preserved in ice in Greenland and Antarctica.

But by studying fossilized material, the WMO also has rough CO2 estimates going back up to five million years.

Emissions are the main factor that determines the amount of greenhouse gas levels, but concentration rates are a measure of what remains after a series of complex interactions between atmosphere, biosphere, lithosphere, cryosphere and the oceans.

Roughly 25 percent of all emissions are currently absorbed by the oceans and biosphere – a term that accounts for all ecosystems on Earth. The lithosphere is the solid, outer part of the Earth, while the cyrosphere covers that part of the world covered by frozen water.

The UN’s Intergovernmental Panel on Climate Change (IPCC) has said that in order to keep warming below 1.5 degrees Celsius, net CO2 emissions must be at net zero, meaning the amount being pumped into the atmosphere must equal the amount being removed, either though natural absorption or technological innovation.

WMO’s deputy chief, Elena Manaenkova, noted that CO2 remains in the atmosphere and oceans for hundreds of years.

“There is currently no magic wand to remove all the excess CO2 from the atmosphere,” she said.

“Every fraction of a degree of global warming matters, and so does every part per million of greenhouse gases,” she said.