Three moon rocks brought to Earth nearly half a century ago and the only known documented lunar samples in private hands, sold for $855,000 (P44.7 million) in New York on Thursday, Sotheby’s said. 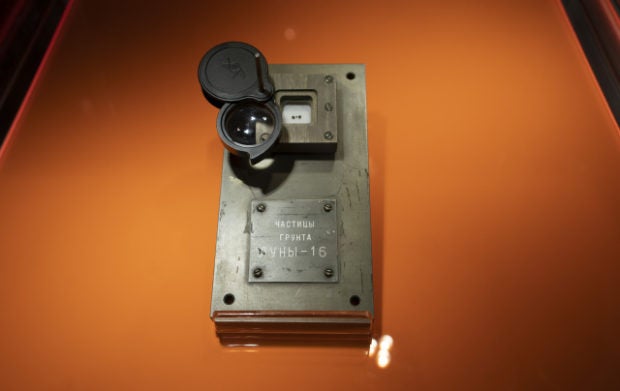 Three moon rocks brought to Earth nearly half a century ago by the unmanned Soviet Luna-16 Mission in 1970 — the only known documented lunar samples in private hands — sold for $855,000 in New York on November 29, 2018, Sotheby’s said. Image: DON EMMERT / AFP

The rocks, collected by an unmanned Soviet Luna-16 Mission in 1970, went for nearly double the $442,500 last paid for them by the present-day U.S. sellers in a Sotheby’s Russian space history sale in 1993.

They were originally the property of Nina Ivanovna Koroleva, widow of Sergei Pavlovich Korolev, the former director of the Soviet space program, who was given them by the Soviet Union in honor of her husband’s work.

Korolev was a rocket engineer, aircraft and spacecraft designer, and mastermind behind the Soviet space program during the 1950s and ’60s.

His work was critical to the success of numerous Soviet space programs, including the first human earth orbit by Yuri Gagarin, but he died in 1966 and never lived to see the lunar soil samples returned from the moon.

In September 1970, Luna-16 landed on the moon, drilled a 35-cm (14-inch) hole in the surface and collected the sample before returning safely back to earth.

It is extremely rare for authentic lunar samples to come onto the market with all those collected by the Americans in the hands of the U.S. government, not individuals, the auction house said.

“Anybody can look up at the sky and get excited about it. So we have a lot of interest from around the world and in all age brackets.”

Hatton said moon rocks come with their “own mythology.”

“When you really think about the true cost … many lives were lost attempting to get up there,” she said. “The symbolism of that, the value is far greater than any dollar amount somebody would pay for it at auction.” NVG

Moon rock hunter closes in on tracking down missing stones