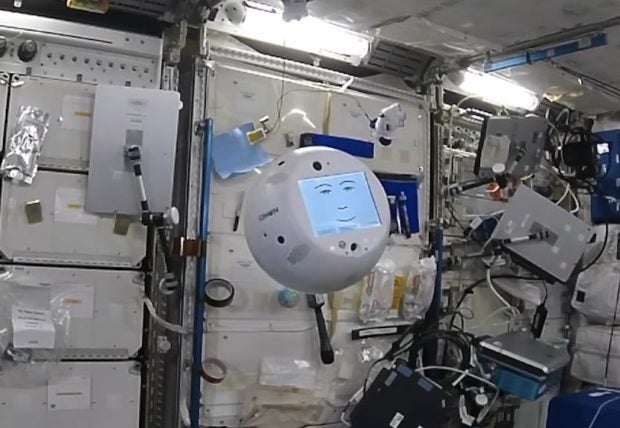 The online debut of the International Space Station’s first robotic crew member could have been smoother if it didn’t start glitching halfway through the demo video.

The European Space Agency (ESA) uploaded a demonstration video of the 3D-printed robot Cimon, which stands for Crew Interactive Mobile CompanioN, on Nov. 30 through its YouTube channel. It was meant to test out the robot’s interactive capabilities with a human crew member.

Astronaut Alexander Gerst supervised the test and also experienced first hand what may be the first robotic tantrum in space.

The test started out routinely enough. Gerst powered up Cimon and began asking some simple questions. He then proceeded to demonstrate Cimon’s ability to assist with experiments. He also showed off Cimon’s ability to move around the cabin.

All seemed well and going according to plan until Gerst asked Cimon to stop playing music. The astronaut noticed that Cimon had gotten stuck in music mode so he reiterated the command to “cancel music.” Cimon was having none of it and said, “I love music! You can dance too.”

“He really likes the music. I understand that,” said Gerst after another command to “cancel music” was seemingly ignored.

Not only did Cimon insist on playing music while streaming a video, the little robot even started drifting lower and away from where Gerst first positioned it. The astronaut noticed and tried to guide Cimon back into place, but the robot just kept floating down toward the deck.

Cimon then said after Gerst explained his observation, “Be nice please.”

The robot later asked, “Don’t you like it here with me?” followed by “Don’t be so mean please.” By this time Gerst and another astronaut were laughing at the unexpected outbursts from the floating, AI-powered robot ball.

Satisfied, Gerst capped off the demo and thanked the developers after Cimon suggested it was time to eat.

Judging from this footage, a future with smart alecky robots like TARS from the film “Interstellar” may not be too far off.

Cimon arrived at the ISS sometime in June through a supply delivery mission. It moves around using 12 internal fans. It was built by Airbus under a contract awarded by the German Aerospace Center.  /ra