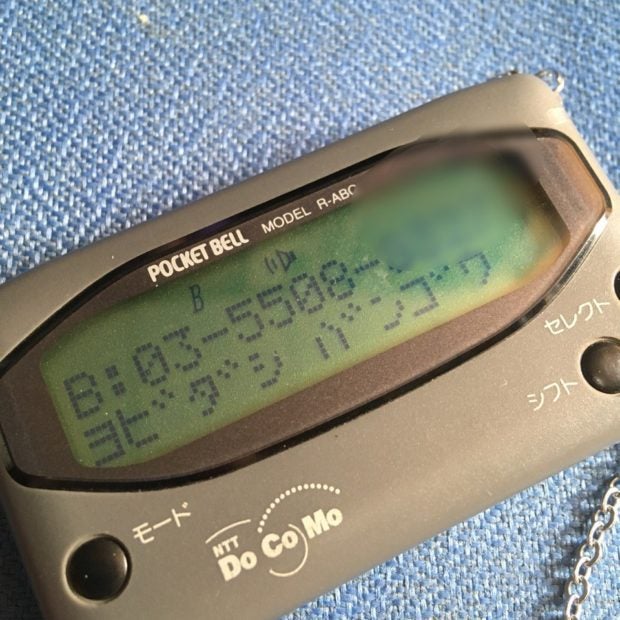 Before smartphones became an everyday item for many professionals around the world, beepers were the most reliable way to contact someone while on the go. But all good things come to an end and Japan’s last beeper service will pull the plug in September 2019.

Tokyo Telemessage is the last company to provide beeper service in the Land of the Rising Sun with around 1,500 customers left still subscribed, as reported by NHK News Web via SoraNews24.

Beepers, also known as pagers in other parts of the world or “pocket bell” for the Japanese, entered Japan in 1968 through the Nippon Telegraph and Telephone Public Corp. It came to prominence in the country around the mid-’90s. At the time, it became the most popular way to contact someone while they were out and about. At its peak in 1996, the Ministry of Internal Affairs and Communications estimated there were around 10.61 million service contracts in the country.

The Japanese also found creative ways to maximize the limited character display on beepers, thanks to the way Japanese characters and numbers could be read.

One such shortcut is “thank you.” This phrase was shortened to “999.” Since “three” in Japanese is “san” and “nine” is “kyu,” three nines or “san kyu” becomes the Japanese pronunciation of “thank you.”

However, the beeper’s reign was short-lived because feature phones quickly took the spotlight. The difference in technology and accessibility to young users made feature phone the more practical choice to stay connected.

Some beeper users may have held on to the service due to its reliability even when in areas where cell signal is difficult–perhaps as a supplement or backup solution when modern technology fails. Nonetheless, without a service provider, users will soon have no choice but to finally retire their devices.  Alfred Bayle /ra