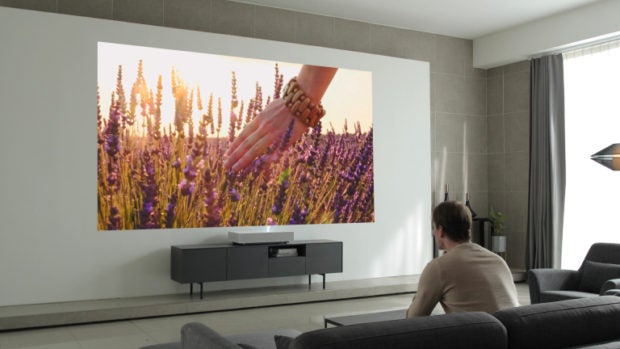 The device, which has already been crowned with a CES 2019 Innovation Award, follows LG’s first 4K video projector, the HU80K.

Highly compact and easy to move around, it projects sharp 4K images onto any flat surface — the wall, the floor, the ceiling. The further away from the wall it is positioned, the larger the image.

At just 5cm from a wall, it projects a 90-inch diagonal image, while at 18cm from a wall, this increases to 120 inches. The LG CineBeam Laser 4K projector delivers 2,500 ANSI lumens and 4K UHD resolution.

It features USB, Ethernet and HDMI connections for access to a maximum of content. Voice commands — directed to the device’s Magic Remote — can also be used to operate the projector (for instance, saying “turn off projector after the movie has finished”) or to select content (by saying “play yoga videos on YouTube”).

LG looks set to be busy at this year’s CES. The South Korean tech firm will, among other things, be presenting its vision of the future of smart kitchens at the Las Vegas event.

The CES will run from January 8-11, 2019, in Las Vegas. Price and availability for the projector will be announced at the Las Vegas show. KM