Snakes seek refuge in toilets, showers due to Australia heatwave

One woman in Australia was shocked after feeling a sharp sensation on her bottom while she was using the toilet. 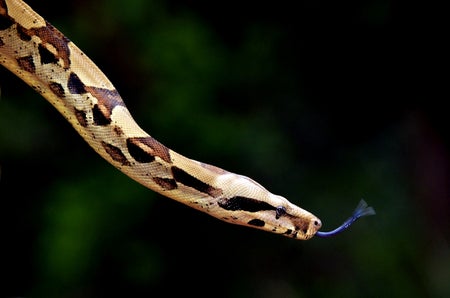 Helen Richards, 59, from Brisbane, Queensland was terrified when she looked down to see a python coiled in her toilet bowl, she told Gold Coast Bulletin via The Morning Bulletin last Jan. 25.

The snake was non-venomous so Richards was treated with only antiseptic spray and had just a few small puncture marks. A snake catcher was quick to the scene and the snake was relocated, while its victim promised to check the toilet before doing her business.

READ: Woman’s butt gets bitten by python while using toilet

Snakes in toilets may be rare, but snake catchers have been kept busy in Australia. In Noosa, Queensland, snake catcher Luke Huntley revealed on his Facebook page last Jan. 25 that he had to remove a 7-foot carpet python from the shower.

“It even turned the shower on!” he said with amusement.

“With the hot days and dry weather these snakes are trying to hydrate and stay cool just like us,” he explained.

7ft CARPET PYTHON IN SHOWER!!!! IT EVEN TURNED THE SHOWER ON!!! 😂 This morning I was called out to a Noosa home where the residents went to have their morning shower only to found this big python had beaten them to it! It had obviously come in through an open door and climbed its way into the shower looking for water. With the hot days and dry weather these snakes are trying to hydrate and stay cool just like us 😊🐍 enjoy everyone! And have an awesome long weekend!!!(For licensing or usage, contact licensing@viralhog.com)Luke 0499 920 290

Days before, on Jan. 21, Huntley was called to remove a tree snake in the toilet.

Down in Sydney, snake handler Georgie Campbell of the Sydney Metropolitan Wildlife Service told The Telegraph on Jan. 25 that she had to rescue three snakes in a day.

She revealed that besides toilets, they also stay in bird baths, fish ponds and watering holes.

Australian residents have been advised not to flush the toilet when they see a snake as it will just return down the pipes.

The January heatwave, which has seen temperatures above 40 degrees Celsius, has been harsher to other animals.

A picture of a koala which drowned in a pool was posted yesterday by non-profit Wildcare Australia.

The organization said she must have been thirsty and needed water amid the heat.

In western Australia, 2,500 camels that gathered to water sources were culled because they were dying of thirst last Jan. 31, as per the Australian Broadcasting Corporation. The week before, dozens of wild horses died at a waterhole in central Australia. Niña V. Guno/JB

Man needs 15 stitches after python in toilet bites his penis