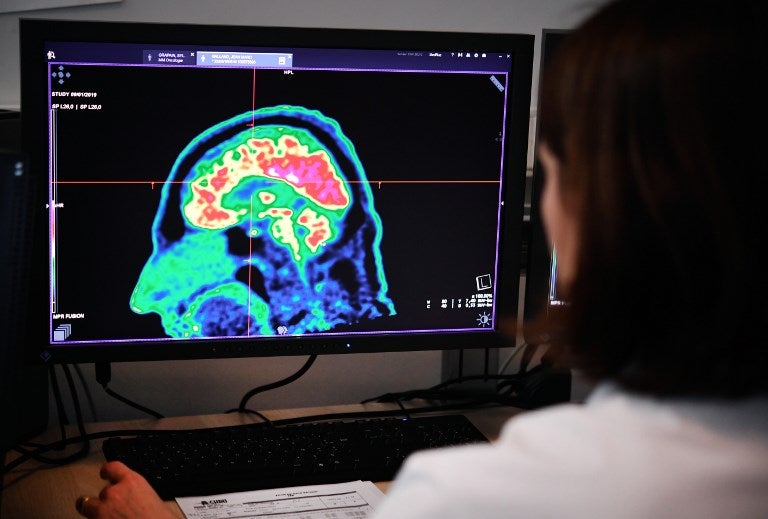 A picture of a human brain taken by a positron emission tomography scanner, also called PET scan, is seen on a screen on January 9, 2019, at the Regional and University Hospital Center of Brest in western France. AFP

The study enrolled 121 women and 84 men, who underwent PET scans to measure brain metabolism, or the flow of oxygen and glucose in their brains.

Like other organs in the body, the brain uses sugar as fuel. But just how it metabolizes glucose can reveal a lot about the brain’s metabolic age.

Subjects ranged from their 20s to 80s, and across those age spans, women’s brains appeared metabolically younger than men’s, said the findings in the Proceedings of the National Academy of Sciences, a peer-reviewed US journal.

A machine-learned algorithm showed that women’s brains were on average about 3.8 years younger than their chronological ages.

And when compared to men, male brains were about were 2.4 years older than their true ages.

“They start adulthood about three years older than women, and that persists throughout life,” said Goyal.

One theory is that hormones might begin shaping brain metabolism at a young age, setting females on a pattern that is more youthful throughout their lives, compared to men.

Scientists hope to find out if metabolic differences in the brain may play a protective role for women, who tend to score better than men on cognitive tests of reason, memory and problem solving in old age.

It “could mean that the reason women don’t experience as much cognitive decline in later years is because their brains are effectively younger,” said Goyal.

More work is underway to confirm and better understand the implications of the research. /cbb