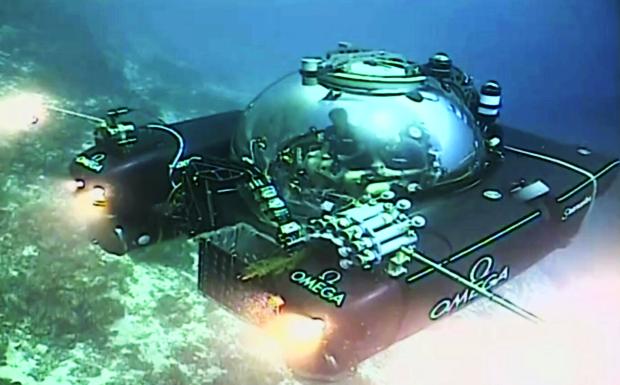 An image taken from a video issued by Nekton shows a submersible from the vessel the Ocean Zephyr during a descent into the Indian Ocean off Alphonse Atoll near the Seychelles, Tuesday, March 12, 2019. Members of the British-led Nekton research team boarded two submersible vessels and descended into the waters off the Seychelles on Tuesday, marking a defining moment in their mission to document changes to the Indian Ocean. The submersibles will be battling strong undersea currents and potentially challenging weather conditions as they survey the side of an undersea mountain off Alphonse Atoll. (Photo from Nekton via AP)

Monsoon storms and fierce underwater currents continued to present a challenge at greater depths as scientific work began in earnest on Tuesday off the Seychelles.

The first transmission came from 60 meters (200 feet) down. Previous deep-sea livestreams cataloging the world’s oceans have been via fiber-optic cable. The new broadcast uses cutting-edge wireless technology, sending video optically through the waves.

The Associated Press is the only news agency working with British scientists from the Nekton research team on its deep-sea mission that aims to unlock the secrets of the Indian Ocean, one of the world’s least explored areas.

The multi-national team of scientists is gathering data to help policy-makers frame protection and conservation measures.

Nekton Mission director Oliver Steeds said the experience battling the waves underlines the need to expand scientific knowledge of the waters off the island nation, which the team is there to do.

“The problem is, when it comes to this place, when it came to the currents, the last current data that was gathered before we came here was in 1882,” he said. “It’s part of the challenge. This is exploration.”

AP video coverage will include exploring the depths of up to 300 meters off the Seychelles in two-person submarines, the search for submerged mountain ranges and previously undiscovered marine life, a behind-the-scenes look at life on board, interviews with researchers and aerial footage of the mission.

The seven-week expedition is expected to run until April 19. /atm