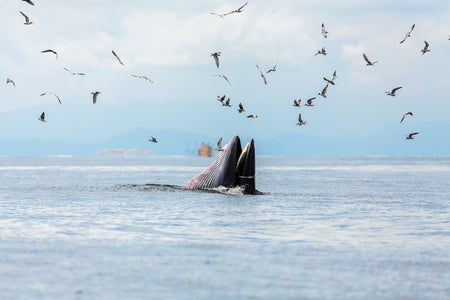 A diver snorkeling in South Africa found himself in an unlikely place while he was deep in the water —  he ended up in a whale’s mouth.

Fifty-one-year-old dive tour operator Rainer Schimpf was with his team to document an annual sardine run, a natural migration event where seals, dolphins, whales and sharks round up smaller fish into bait balls, reported Barcroft TV on Thursday, March 7. Schimpf said he was trying to get a shot of a Bryde’s whale getting through a bait ball.

“The next moment, it got dark and I felt some pressure on my hip,” he said in the report. “And once I felt the pressure I knew a whale had grabbed me.”

“There is no time for fear on a situation like that, you have to use your instinct,” Schimpf added. He knew that he could have been either swallowed by the whale or it could have swam farther with him in its mouth, the report stated. Luckily, the whale eventually released him.

Upon getting back up from the water, Schimpf asked his photographer friend Heinz Toperczer “Did you get it (the photo)?” to which his friend answered “yes.”

Despite what happened, one of the witnesses, Claudia Weber-Gebert, asserted that whales “are no man-eaters,” are very gentle creatures and highly sensitive. It may have even be scary for the whale too, she said.

The report cited the Bryde’s whale, which can reach lengths of up to 55 feet and weigh up to 30 tonnes, as the kind that hunts for large swarms of potential prey. The whale, it turns out, may have made a mistake in taking Schimpf.

“So this was really an accident, they are gentle giants,” Weber-Gebert told the publication.

As for the diver, he was not merely happy to be alive.

“It was an interesting experience for me,” he said in the report. “It gives me a connection to the whale which I don’t think anyone else had before.” Katrina Hallare/JB