American gamer Tyler Blevins, known as “Ninja”, embarked on a multi-million dollar career from his parents’ basement and told AFP his family only began to understand his obsession when the checks started rolling in. 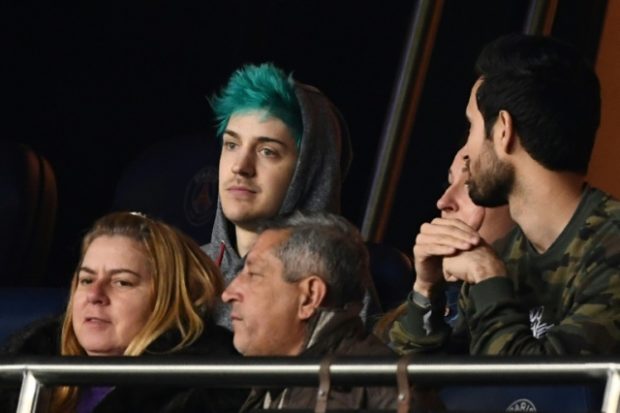 The 27-year-old Blevins is one of a clutch of gamers who stream themselves playing Fortnite either on Youtube or Twitch and recoup riches and rock star adulation from a vast and youthful following.

Thanks to his 35 million followers on Youtube and Twitch Ninja now hangs out with sports and music superstars like Neymar, Drake and Travis Scott, has a blockbuster deal with energy drink Red Bull, and is no longer confined to his parents’ basement in Chicago where his odyssey began.

Almost unknown to the over-30’s, Ninja’s spikey blue locks, dangerously pale complexion and nervy fast-talk are almost universally known to the younger generation, who have been swept away by the massively popular Fortnite game. A significant part of his income comes from cash donations from fans while watching him stream.

Blevins said his life took a swift turn for the better when he discovered Fortnite, a blockbuster that swept the gaming sector when it came out in 2017 and claims 200 million players, more than eight million of whom are playing at any one time.

“It was fun, it was fresh, free to play which was great and I just fell in love with it,” Blevins said of Fortnite, a game where players para-glide onto an island where they battle to the death with 99 other players.

“I’ll stick with Fortnite until I think it is no longer beneficial but the game is fun, it’s great. It is not going anywhere anytime soon,” he said.

“It is just so much fun to watch. It tells a story, people can get interested in it. It’s very simple. You start with 100 people. Last person standing wins.”

Ninja initially played competitive cash prize Fortnite but has left that behind.

“I used to compete all the time. But it’s very difficult to maintain a very healthy streaming schedule and compete as well,” said Blevins, who earns around 500,000 dollars a months streaming.

“Every day that you’re not streaming, viewers are going to look for someone else,” he explained.

“I want to continue to stream and set records and entertain my audience.

“You can get people who want to sponsor your streams, you advertise their products and there is ad revenue which is the most simple.”

From a room in his parents’ Chicago home Blevins began to stream professionally eight-years ago and says his parents slowly began to realize there was method in his madness when the cash pile kept growing.

“When I was 19… I started streaming for a full year. And I was like: ‘mom if I start making over like minimum wage, I want to full-time stream and she was more than OK with that. I told her if I was making less than that, then I would go back to school,” he said.

“My parents were hesitant but you know checks don’t lie. First, they didn’t think it was real. Once I started getting the money, both of them understood it a lot more.”

He spent endless hours in the basement, ignoring the real world with no time for a social life or other interests.

“I would always be in the basement, practicing and playing Halo (his previous love before Fortnite) and I would hear the parties and family get-togethers upstairs,” he said.

“I hung out with none of my friends unless I was playing video games with them.

“I was a terrible boyfriend. I neglected them and just played video games the entire time.”

But the gamer says his full-on geek days are now behind him and that he enjoys a more regular family life and likes to be with people more.

“Now more than ever, me and my wife are making much more time to hang out with our family,” he says. NVG