Experts warn of cyber threats ahead of Israel’s election 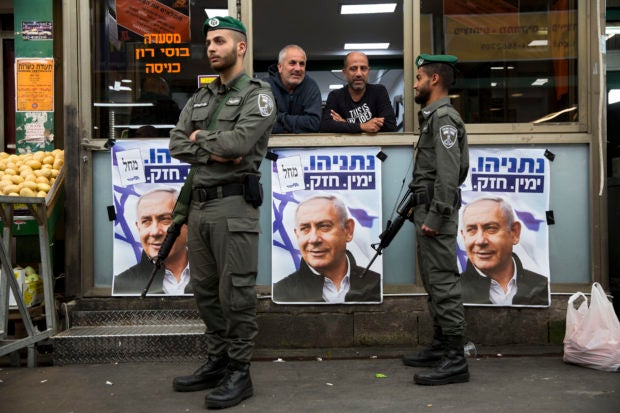 In this Tuesday, April 2, 2019 file photo, Israeli border police officers stand guard next to posters depicting Israeli Prime Minister Benjamin Netanyahu at the Ha’tikva market in Tel Aviv, Israel. As Israel prepares to hold a national election next week, experts say it is vulnerable to the kind of foreign hacks and cyber campaigns that have disrupted the political process in other countries. AP FILE PHOTO

JERUSALEM — As Israel prepares to hold a national election next week, experts say it is vulnerable to the kind of foreign hacks and cyber campaigns that have disrupted the political process in other countries.

Prime Minister Benjamin Netanyahu says there is “no country better prepared” to combat election interference. But despite Israel’s thriving tech sector and vaunted security capabilities, experts say its laws are outdated and that Netanyahu’s government hasn’t made cyber threats a priority.

Campaigning had just started to ramp up in January when the director of the Shin Bet, Israel’s internal security agency, told a closed audience that a world power had tried to disrupt the April 9 vote. Suspicion fell on Russian operatives, now infamous for their alleged cyber meddling in America’s 2016 presidential race and the Brexit referendum.

Soon after, news erupted that Iranian agents had hacked the cellphone of Benny Gantz, a former general who is the main challenger to Netanyahu. Although the breach occurred months before Gantz joined the race, the scandal threatened to derail his campaign, which is largely based on his security credentials.

Boaz Dolev, the CEO of ClearSky, a cyber security firm, said Iranian operatives have honed their phone-hacking skills over the past five years and targeted nearly all of Israel’s senior army officials. He said Israel is also a target for hackers who support the Palestinian-led boycott movement, and who launch an annual wave of attacks that this year will coincide with the vote.

But many experts say the greatest threat comes from within.

Karine Nahon, president of the Israel Internet Association, says the main danger comes from Israeli politicians and their supporters spreading disinformation on social media. She said there is little in the way of legislation to prevent such activities as laws on political propaganda were written before the digital age and are poorly enforced.

On Monday, an Israeli group known as the Big Bots Project revealed what it said was a sprawling network of fake and automated social media accounts, some operated by real people, that circulated posts supporting Netanyahu and smearing his opponents, particularly Gantz.

Noam Rotem, one of the researchers, said the legion of accounts pumping fake news into democratic debate poses “the biggest and most sophisticated threat we’ve seen yet” to Israel’s electoral integrity.

The researchers said they found no direct link between the network and Netanyahu or his Likud party. But Netanyahu’s son Yair, who has run into trouble in the past for controversial social media activity, has frequently liked posts by the network’s accounts.

At a press conference, the prime minister dismissed the report as a “fake investigation,” saying almost all of the accounts in question turned out to be operated by real people.

But critics say the government has failed to take necessary precautions, even as concern over cyber meddling in elections has grown in recent years. Election systems in Israel are not formally designated as “critical infrastructure,” a move that would expand the mandate of security agencies to protect them. The main law regulating political campaigns was passed in 1959 and tailored for TV and radio.

Last fall, legislators introduced an amendment that would subject online political ads to its requirements. The bill seemed guaranteed to pass, but at the 11th hour, Netanyahu’s Likud shot it down.

The Shin Bet and the Cyber Directorate, the main bodies tasked with overseeing election security, both report to the prime minister, something Rotem views as a “conflict of interest” during a hard-fought election campaign.

The Cyber Directorate declined to comment on its efforts to secure the election, referring questions to the Central Elections Committee, a monitoring panel made up of parliamentarians from different political parties.

In a statement, the committee said it has a “plan of action” that includes “increased alertness and awareness,” but that its actions “cannot be publicized” because of their sensitive nature.

It pointed out that Israel still uses paper ballots, enhancing security on election day. But the vote count is digitized, which means that “in the last and most critical stage of the voting process, our database is vulnerable,” said Lotem Finkelstein, head of the threat intelligence team at Check Point, a cybersecurity firm.

In its only public step so far, the elections panel issued a decree March 1 banning anonymous election ads from social media platforms in Israel.

But Finkelstein called the measure “deficient.”

“I haven’t seen anyone reprimanded by the elections committee,” he said. “It just issues recommendations.”

Rotem said cybersecurity firms have identified efforts by Iran, Saudi Arabia and Turkey to breach party databases, troves of sensitive voter information he says is “just circulating on the internet.”

Social media networks themselves have recently stepped up efforts to combat fake news and election meddling.

Facebook says it has shut down thousands of Iranian pages and accounts aimed at sowing doubt about the legitimacy of Israel’s elections, and that worldwide it is purging a million fake accounts every day. Twitter says it took action against fabricated accounts after the Big Bots Project report, without elaborating. The report authors say Twitter removed half of the bot accounts they identified.

“Looking back to 2016, we were slow to act on misinformation, but we’ve made massive strides,” Sean Evins, Facebook director of politics and government outreach for Europe and the Middle East, told The Associated Press. He said the company struggles to “walk a fine line between security and free participation in political debate.”

Following pressure from the Central Elections Committee and other Israeli officials, Facebook rolled out Israel-specific measures one month before elections: an authorization process for buyers of political ads and third-party fact checking that demotes unverifiable posts in newsfeeds.

But Nahon, of the Israel Internet Association, said those measures were not enough to combat systemic threats from bots, hackers and proxy accounts that are difficult to trace.

“The last word has not been said on these threats,” she said. “We’re expecting much more.”