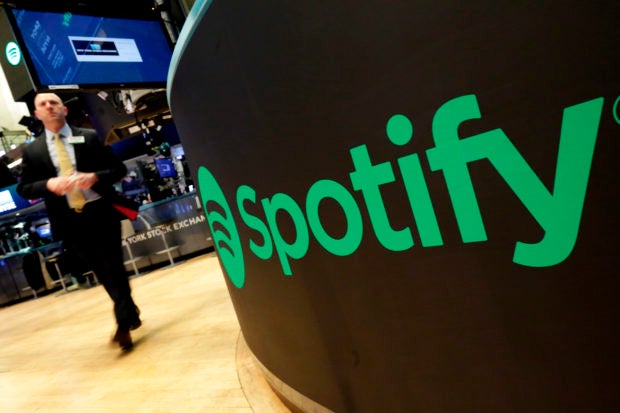 In this Tuesday, April 3, 2018 file photo, a trading post sports the Spotify logo on the floor of the New York Stock Exchange. Music streaming service Spotify says the number of its paying subscribers has hit 100 million for the first time, up 32% on the year and almost twice the latest figures for Apple Music. AP FILE PHOTO

COPENHAGEN, Denmark — Music streaming service Spotify said Monday that its paying subscribers have reached 100 million for the first time, up 32% on the year and almost twice the latest figures for Apple Music.

The Stockholm-based company called the figure, which was reached during the first three months of 2019, “an important milestone.”

The growth was driven, among other things, by “a better-than-planned promotion in the U.S. and Canada.” Spotify said it had reached “the high end of our guidance range of 97-100 million.”

"Whenever we feel inspired, we're only a couple of steps away from being able to create. Which, at the end of the day, is what's most important to us." From @themariasmp3
Listen to their single "Clueless" on #POLLEN now https://t.co/cxLnbLNupc pic.twitter.com/e98JwPRB8P

By comparison, archrival Apple Music had about 50 million paying subscribers at the end of 2018, the latest available figures. Apple is expected to release new figures with its earnings report on Tuesday.

The number of Spotify’s total monthly users, which includes those who do not pay a monthly subscription fee but use the service with intermittent ads, rose to 217 million in the first quarter.

The strong growth in its user base led to a 33% rise in revenue, to 1.5 billion euros ($1.7 billion). Yet like many tech companies focusing on building market share, the company continued to lose money, reporting an operating loss of 47 million euros.

Spotify says that voice speakers like Google Home and Alexa are a “critical area of growth” and is looking to invest more in podcasts to supplement its offering of music.