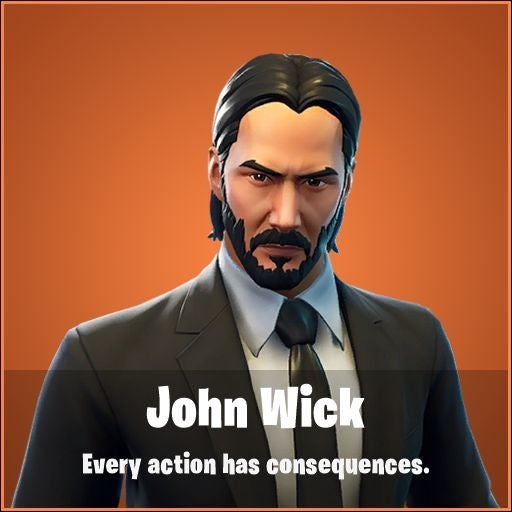 Season 9 of hit mobile console and computer game “Fortnite” has brought not just a new shopping mall, corporate district and airborne slipstream transport system to its island arena, but hints that action movie hero John Wick will be making a comeback.

Back in early 2018, a John Wick referencing sharp-suited character outfit called The Reaper had been made available to Battle Pass finishers, and it now looks like the real deal is getting involved.

With the May 9 introduction of season 9, attentive fans noticed that a beachside property in the game’s southeastern area had been overhauled and now looks a lot like John Wick’s residence from the films.

That could have just been another unofficial homage, but data miners found evidence that a legitimate crossover is in the works.

Not only is there a series of inactive challenges grouped under the name “Wick’s Bounty”, but visuals for a new character outfit have been found, as well as text files that reference the movie franchise.

This time, the John Wick skin is named as such, even closer in appearance to Keanu Reeves’ action movie icon.

It would appear that a “Fortnite” Limited Time Mode (LTM) will in some way feature The Continental, a hotel central to the franchise’s lore.

Text quotes found by Twitter user Lucas7yoshi, who has a track record of digging up hidden “Fortnite” files, include overt franchise references such as “Excommunicado” and “Tick tock, Mr. Wick.”

Once the John Wick crossover goes live, it will be the third time that “Fortnite” has teamed up with a big-impact action movie.

Giant gold gauntlet-wearer Thanos, the “Avengers: Infinity War” and “Avengers: Endgame” antagonist, starred in two separate LTM events that coincided with the release of Marvel’s blockbuster films in May 2018 and April 2019, respectively.

“John Wick: Chapter 3 – Parabellum” releases in theaters this week, from May 15 in selected territories (including the UK, Ireland and the Philippines), with Australia, Hong Kong, Malaysia, the Netherlands and New Zealand among its May 16 intake, and Canada and the USA involved from May 17.  RGA /ra