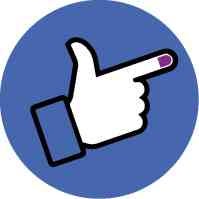 MANILA, Philippines — It may sound self-evident, but a study said there was a direct “mathematical relationship” between the number of likes, posts and comments on the Facebook pages of senatorial candidates and the number of votes they received in the May 13 midterm elections.

“There is a mathematical relationship between Facebook likes and winning. More or less it’s 3.2 votes associated with each like,” said professor Cristina Montiel, who teaches peace and political psychology at Ateneo de Manila University.

The study, “Senatorial Postscript: Campaign talk, predicting winnability from Facebook likes and other big data analyses,” was presented on May 23 by Montiel and coauthor Joshua Uyheng, a Ph.D. student of societal computing at Carnegie Mellon University.

It used an algorithm to analyze about 19,000 Facebook posts and 1.4 million comments on the Facebook pages of senatorial candidates, from October 2018 to April 2019.

According to the researchers, it appears that the higher the number of likes and comments on a candidate’s Facebook posts, the better the numbers at the polls.

Grace Poe, Montiel noted, got the most likes among the candidates covered by the study and ended up in second place in the so-called Magic 12.

The authors, however, were quick to disavow any claim that Facebook likes, posts, or comments were the main or only decisive factor behind the victory or defeat of senatorial candidates. “Causation is possible, but it is not established,” Montiel said.

Asked if they took into account the integrity of Facebook likes, with bots and troll farms possibly inflating their number, the researchers acknowledged the study’s limitation.

“You have to take the data as it is, with limitations. It’s not a survey [of who people will vote for],” Montiel said. “It’s probable that battles were fought outside of Facebook,” she said.

Long before the age of social media, an in-depth study also analyzed the Filipino voters’ mind-set.

In 1995, the Institute for Political and Electoral Reform presented “A Voter’s Choice: Myself: A Psychological Study on Voting Behavior of the Filipino Electorate.” It updated its findings in 2003 and came up with a list of factors that mainly shape a voter’s choice.

Among them is a candidate’s popularity; endorsement by celebrities, relatives, community leaders or organizations; visibility (seen through ubiquitous posters and campaign materials), a candidate’s accessibility to the masses; support for government programs; and political machinery.

While fame on Facebook may be a predictor of votes, Montiel and Uyheng cited some outliers: Senator-elect Nancy Binay, for example, got enough votes to enter the Magic 12 but did not have that many likes on social media.

On the other hand, opposition candidate and former Interior Secretary Mar Roxas had many likes but did not do well in the polls. Montiel surmised that some of Roxas’ Facebook likes may have come “from [those who have followed] his long career in public service and might not be reflective of current public support.”

The study also found that candidates who “articulated personal values of loyalty and service” got higher votes.

Uyheng said that one particular candidate who appeared to have posted numerous Facebook comments about the importance of loyalty during the campaign period was former presidential aide and now Senator-elect Christopher “Bong” Go.

The incoming lawmaker, he noted, frequently referenced his relationship to his boss in Malacañang with posts that had this recurring theme: “Bong Go will continue serving the country and supporting President Duterte.”

Based on the election results, candidates who used social media to criticize the status quo and the Duterte administration did not do well in the polls, the researchers noted.

“Criticism of the status quo is a strong predictor of worse electoral performance,” they said, citing the shutout of the opposition Otso Diretso coalition.

Mortiel and Uyheng also analyzed the use of Filipino and English in Facebook posts and comments during the campaign.

The administration candidates often used the native tongue in their social media statements, but drew online reactions mostly in English. It could be taken as an indicator that their messaging “resonated with the middle class or beyond,” the researchers said.

“Majority of the comments on the administration pages were of support,” Uyheng noted.

“Comments [from netizens] that defined the Facebook conversation in the Otso Diretso Facebook pages are insults and ridicule, though not necessarily directed [at] the candidates,” Uyheng said.