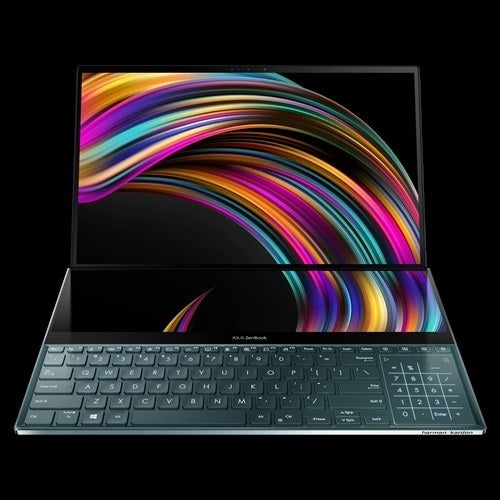 A day before Computex 2019 in Taiwan opens to the public, Asus showed off the new ZenBook Pro Duo to the public. It comes with three displays, two of which are touch screens with enough space for a full-size mechanical keyboard.

The 15.6-inch main display and the 14-inch touchscreen display which takes up the top half of the base are both UHD 4K, though the main display is a glossy OLED screen while the touchscreen display has a matte finish. The third screen, which doubles as a trackpad and digital number pad, is located at the right of the full-size mechanical and backlit keyboard.

Between the two touch displays, the larger one can fit individual windows inside or span one from the main display downwards to see more of a page at once. In the box, you will get a compatible pen to use on the lower display.

The Windows 10 notebook is powered by an eight-core Intel Core i9 processor (or an optional Intel Core i7 processor) with an Nvidia RTX 2060 GPU while supporting Alexa and Cortana digital voice assistants. Owners will be able to choose between 8 gigabytes, 16 gigabytes or 32 gigabytes of memory and between 256 gigabytes, 512 gigabytes or 1 terabyte of storage.

A second, less expensive version of the laptop was announced with the ZenBook Pro Duo featuring a smaller secondary screen and a less powerful processor.

Though the prices and release dates have not been revealed, the company said that the laptops will hit the market in the third quarter of 2019. HM/JB