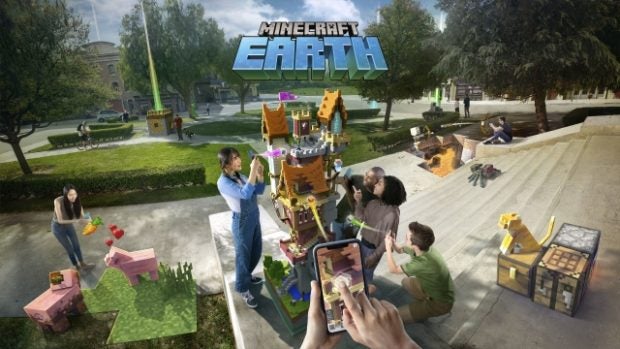 A four-minute demo at Apple’s 2019 Worldwide Developers Conference (WWDC) showed how “Minecraft Earth” players can place and alter buildings, resize and interact with them, as the augmented reality (AR) game approaches its summer 2019 testing phase.

“Minecraft Earth” is heading towards a closed beta that is to begin at some point over the next three months.

Using iOS devices, Persson was able to watch Winters chip away at a pre-made castle tower.

Persson’s display also showed which Minecraft tool Winters was using as well as her name, as his view into “Minecraft Earth” was updated in real-time.

Winters demonstrated two ways in which “Minecraft Earth” users could insert themselves into the game’s world, one with an iOS-exclusive aspect.

First, she was able to summon a character avatar. Persson’s device was able to track Winters’ arm movements and have them interpreted as the avatar waving its own arms, likely a feature implemented via Apple’s ARKit 3.0 motion tracking specification for iOS 13, expected September 2019.

Second, Winters caused a tabletop version of the “Minecraft” tower to disappear into a temporary black hole and then reappear as a larger version of itself from the stage floor.

Using a feature called People Occlusion, Winters could then walk around in the scene, interact with levers affixed to the tower, and hide behind a flower that Persson planted in front of her.

People Occlusion and Motion Capture were both introduced as iOS-only features.

The pair also showed what other sorts of heightened interactivity players could expect.

Winters pulled a lever to summon a flock of chickens that scampered over to Persson as he equipped a handful of seeds; another level caused the virtual floor to crumble, revealing skeletons roaming a dungeon below.

Persson could target the skeletons, though it was not clear if or how players would enter an underground layer if their physical surrounds did not allow it, nor what would happen if a player chose to walk over such a virtual gap.

“Minecraft Earth” is to enter an invitational beta testing phase on iOS this summer, Winters and Persson noted at the close of their four-minute showcase.

The location-based AR game was already announced for both iOS 10 and Android 7 and up, though Apple’s rival mobile platform was not mentioned during the WWDC presentation. RGA/JB