NASA: Intense work under way on rocket for future moonshots 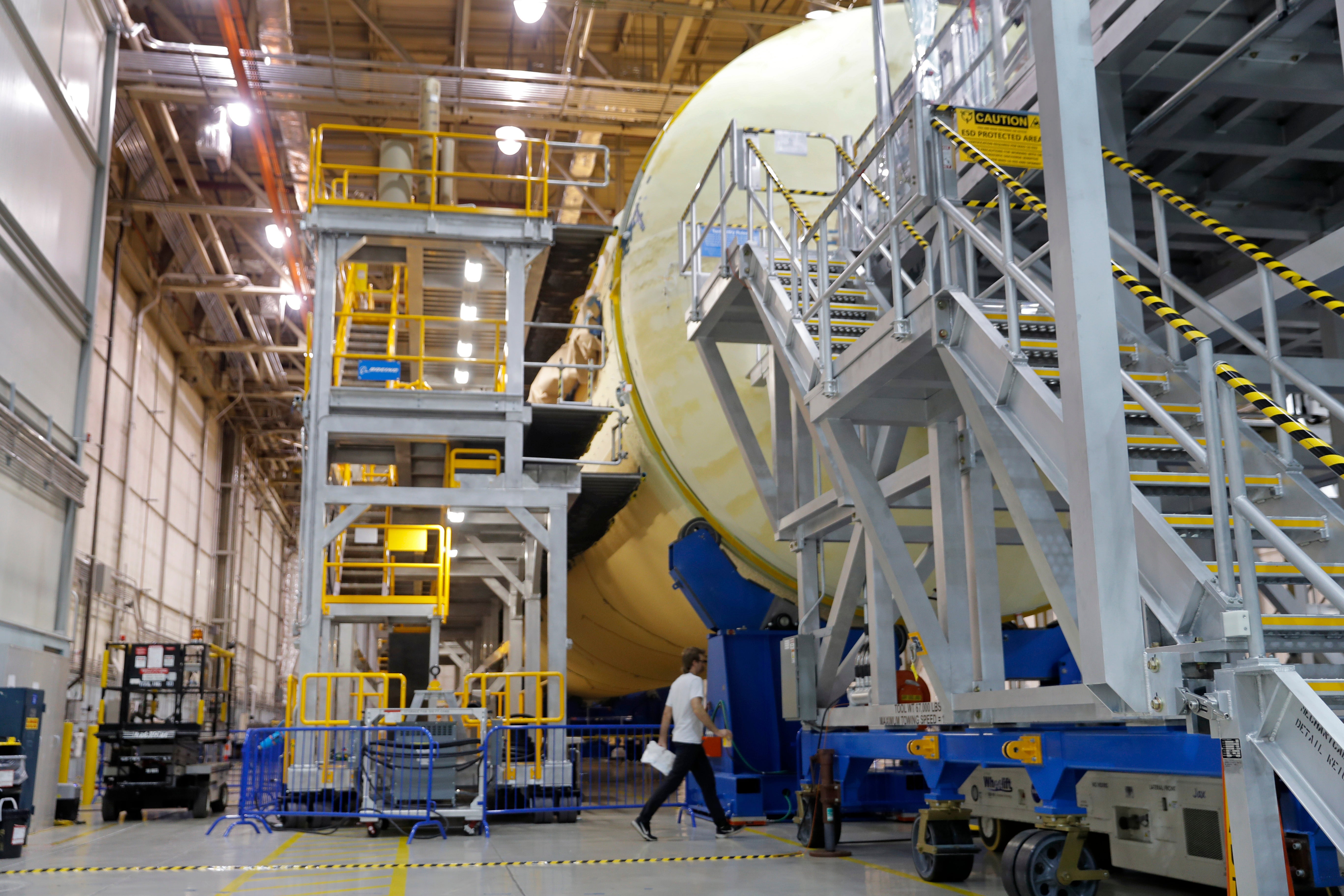 A man walks underneath the core stage for NASA’s Space Launch System (SLS), which they say will carry the Orion spacecraft, and ultimately a crew, to the moon and beyond, at the NASA Michoud Assembly Facility in New Orleans, Friday, June 28, 2019. (AP Photo/Gerald Herbert)

NEW ORLEANS  — Crews are working around the clock at a NASA rocket factory, intent on meeting a new fall 2020 deadline to test launch a mega-rocket designed to propel astronauts to the moon and beyond, a space agency official said Friday.

“I came out here in the middle of the night … talking to people who were working on the engine section, working hard through the night,” NASA Deputy Administrator James Morhard said on a press tour at New Orleans’ Michoud Assembly Center .

He said the core rocket assembly __ or Space Launch System __ is 80 percent complete, with one of five sections still under assembly.

If all goes well, the often-delayed Artemis 1 test flight is expected take place in fall 2020, though no launch date has been announced. Plans call for the rocket to carry an uncrewed Orion capsule aloft before the engines are jettisoned 8 minutes and 14 seconds out. The capsule is then to make a double loop around the moon during 25½ days in flight, NASA has said.

Officials said no commercial rocket, current or planned, is as powerful as the Space Launch System, which will carry a load three times as heavy as the space shuttle could handle. They also called it a new approach to reaching the moon, unlike the Apollo missions decades ago.

“The exciting part is this is not going to be done like Apollo … where we put a flag on the moon and left,” said Lionel Dutreix, deputy chief operations manager at Michoud. “We’re going to keep returning to the moon and use it as a technical base and knowledge to go on to Mars. We’ve got to make sure this rocket will meet those needs.”

The rocket isn’t reusable because, under current plans, it would cost more to recover and refurbish the engine assembly than to build anew, Dutreix said.

In December, the giant rocket is to be transported on the NASA barge Pegasus to Marshall Space Flight Center in Alabama for testing. When topped with the Orion spacecraft and its fuel tank, it will stand 322 feet (98 meters) high — taller than the Statue of Liberty but shorter than the Saturn V rocket that launched the Skylab space station and the Apollo program that carried men to the moon.

The rocket section currently being assembled at Michoud will hold four RS-25 engines of the kind that propelled space shuttles.

The engines were visible at Michoud, with bright red covers marked “THIS SIDE FACES AFT” covering their wide back ends. Officials said NASA has another dozen for further Artemis missions, with six more under contract.

Asked whether $20 billion to $30 billion was an accurate figure for cost overruns on the program, the deputy administrator said, “I’m not going to stand here and give an exact budget.”

Morhard also wouldn’t say whether he expects NASA to get the $1.6 billion 2020 budget addition requested by President Donald Trump for space exploration.

“The House added $1.3 billion for science programs. The Senate hasn’t marked up the bill. I’m waiting to see what the Senate does,” he said.  /muf