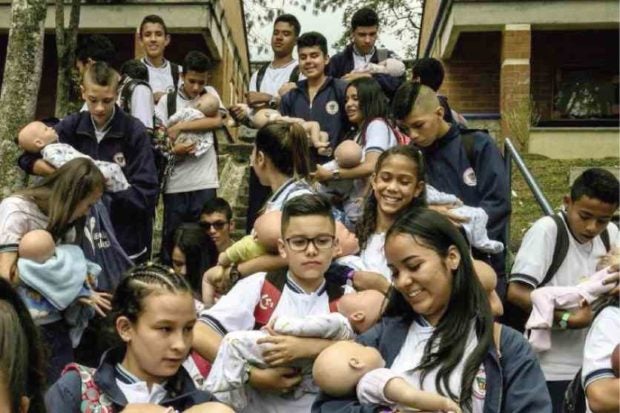 CRY BABIES Children in Caldas, Colombia, are being made to experience caring for infants using crying robot babies to make them realize why they should avoid teen pregnancies. —AFP

CALDAS, Colombia — “Anthony” cried so hard at night that Susana Ortegon couldn’t sleep. The weekend felt like an eternity for the 13-year-old.

So when she handed back her “robot baby,” it was with great relief. She had taken part in a program launched by the Caldas municipality in Colombia to try to tackle the problem of teenage pregnancies.

“This experience was pretty tough, it’s not easy being a mommy or a daddy,” Ortegon said.

The baby’s cries were so loud that they even bothered her parents. “It’s awful! Awful! On top of that, the baby never stops crying and you’ve got to look after it all the time,” she added.

The baby, a rubber doll with built-in software, cries when it wants to be fed, have its diaper changed or simply needs a cuddle.

It’s a voluntary program launched in schools by the Caldas municipality, just outside Medellin, in a bid to reduce the high level of teenage pregnancies in the town of 78,000.

The initiative has been used in at least 89 other countries and is being included in the local authority’s social project that includes workshops and sex education classes.

“With this strategy we managed to reduce the number of teenage pregnancies by a huge amount,” said Juan Carlos Sanchez, the local authority’s health secretary.

When the program began in 2017, the municipality registered 168 pregnancies of girls aged 13-19. That number was down to 141 last year, Sanchez said.

The robot babies are programmed to behave according to a specific age. Ortegon’s was designed to mimic the behavior of a 2-month-old, which meant it needed care on average once an hour.

“It’s like having a real baby,” Ortegon said. “Last night I got so desperate I started crying.”

Not just for girls

“Pregnancies are not just the responsibility of women,” said the 17-year-old, just seconds before Sofia started to cry. “This teaches us a lesson.”

Authorities say the program has been well-received by parents, even though some were opposed to sex education, believing it promoted sexual activity among students.

“I think it’s a great project because it raises awareness among teenagers that having a child at such a young age, especially without finishing their studies, is very difficult,” said Viviana Sierra, Ortegon’s mother.