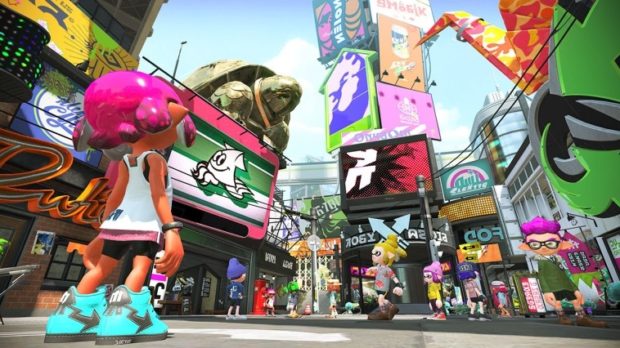 “Splatoon 2” is getting a big send-off from some of its Nintendo siblings this summer. Image: Nintendo via AFP Relaxnews

Two of Nintendo’s most unexpected recent hits are teaming up for the last Splatfest on July 18, within Switch games “Tetris 99” and “Super Smash Bros. Ultimate”, as well as mobile hit “Animal Crossing: Pocket Camp”.

Released as a follow-up to Wii U hit “Splatoon” in July 2017, “Splatoon 2” is much more widely known, thanks to the comparative success of the Switch console which is approaching the end of its planned event schedule.

Splatfests have been running on a monthly basis, providing the game’s worldwide player base with series of themed, team-based paint battles with which to get involved.

In the “Splatoon” franchise, players use paint guns, rollers, buckets and various other pieces of equipment to cover an arena in their team’s color, transforming from kids into paint-swimming squids, and back again, in order to better traverse each environment.

The final “Splatoon 2” Splatfest, dubbed the Splatocalypse, is set for nearly two years to the day after the game debuted.

Nintendo has already announced a 72-hour event starting at 5 a.m. PT but in the lead-up will also be running a special “Tetris 99” tournament.

Participants in the fifth “Tetris 99” Maximus Cup, the Splatfest Edition, will be able to unlock an exclusive “Splatoon 2” in-game theme should they earn 100 event points or more.

In any match, a first-placed player will receive 100 event points, second place 50 points, third place 30 points, and fourth to 10th placed players will get 20 points.

Those who ranked 11th to 30th will accumulate 10 points for their efforts while those in 31st to 50th are allocated 5 points, and those who will place 51 to 80 will receive two points, with the remainder of a 99-player round finishing empty-handed.

By associating “Splatoon 2” with “Tetris 99” and “Super Smash Bros. Ultimate,” Nintendo can further encourage Splatfest aficionados to view those two other games as suitable alternatives, even if they do not feature the same level of team play.

The game is free for subscribers to Nintendo’s annual $19.99 (about P1,000) Switch Online membership scheme. HM/JB