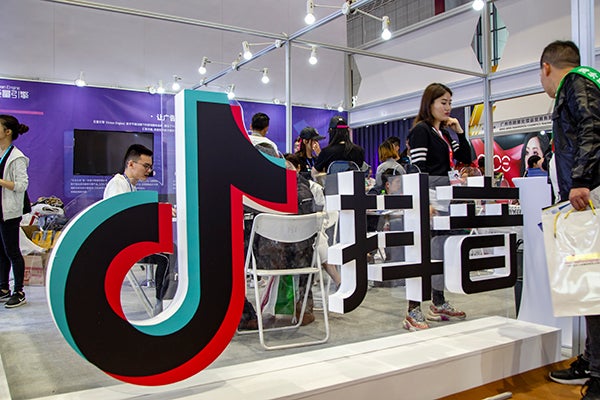 HANOI －A teenager on Hang Dau street in downtown Hanoi took out his phone and started to shoot a video of an old homeless woman who was sitting under the awning of a store with her small bundle of rugged blankets and bags.

Dao Duy Nam, a junior student at Hanoi University of Science and Technology, says that he filmed the old woman to share her story online on TikTok.

“I hope that people will see it and come and give her some donations,” Nam says, adding that many disadvantaged people were offered help after similar videos went viral on the platform.

TikTok, known as Douyin in China and developed by Beijing-based startup Bytedance, is an app for making and sharing short videos, generally from 15 to 60 seconds long. The videos are usually set to music, often featuring someone cooking, dancing, doing a trick, or lip-syncing.

Globally, TikTok was the third most downloaded app in the first quarter of this year, according to the United States-based market research firm, Sensor Tower.

Vietnam is among the fastest growing Southeast Asian markets for TikTok users, with the platform registering 12 million regular users by the end of March. It has more than 1,000 official content creators, according to Nguyen Lam Thanh, policy director of TikTok Vietnam.

Thanh says his company wants to triple the number of official content creators to 3,000 by the end of this year.

As of late 2018, each Vietnamese user spent an average of 28 minutes per day on TikTok, with the hours between 6 pm and 8 pm on Fridays and Saturdays recording the most site visits, according to the company.

“Watching TikTok videos is my daily hobby,” says Trinh Thi Khanh Ngoc, a college student in Hanoi, before adding that she has been cutting down time spent on Facebook and YouTube and switching to Tik-Tok, just like many of her friends.

Just after downloading and opening TikTok, videos that TikTok chooses to highlight will start playing automatically. Users can see content straight away under the “For You” tab.

“You don’t need to follow anyone at first, TikTok will fill your ‘feed’ before you’ve connected with a single person. Meanwhile, on Facebook, it can seem very empty if you don’t have a few hundred friends,” Ngoc says.

Later, if users would like to watch videos from people they like on Tik-Tok, they can switch to “following “them or continue to check out videos from popular users or any other Tik-Toker who amuses them.

According to Ngoc, videos on Tik-Tok are more lively and diverse, and more entertaining for young people compared to those on other social media platforms.

“It’s also very easy to navigate through the videos, just by scrolling up and down, not by tapping or swiping side to side,” she says, while surfing through some of her favorites about make-up tips and fashion, among others.

“You can also see what’s trending in other countries, including China and South Korea. It brings you the feeling of international integration,” Ngoc states.

Thanks to its popularity, TikTok is helping to create and spread positive trends in Vietnam, with hashtags playing a large role by encouraging various online “challenges”, jokes or repeat formats.

For instance, the hashtag #Hello-Vietnam is helping to promote tourism as part of a marketing program in partnership with the Vietnam National Administration of Tourism. The organization aims to produce and screen around 30,000 short videos on the TikTok platform with a target of reaching 100 million views.

On June 15, TikTok released the first video of the series under the hashtag#HelloDanang, introducing tourist attractions in Vietnam’s central city of Da Nang. After just over six months, hundreds of videos have been uploaded and have attracted 72.5 million views.

Another trending hashtag on Vietnam’s TikTok currently is #Ketromnhua, which means “plastic thief” in English. The trend calls for users to make and share videos on how they reduce, reuse, recycle and replace plastic items, or take part in campaigns to clean up piles of rubbish that blight the community.

“These videos show us the real efforts people are making toward achieving a greener lifestyle,” Ngoc says.