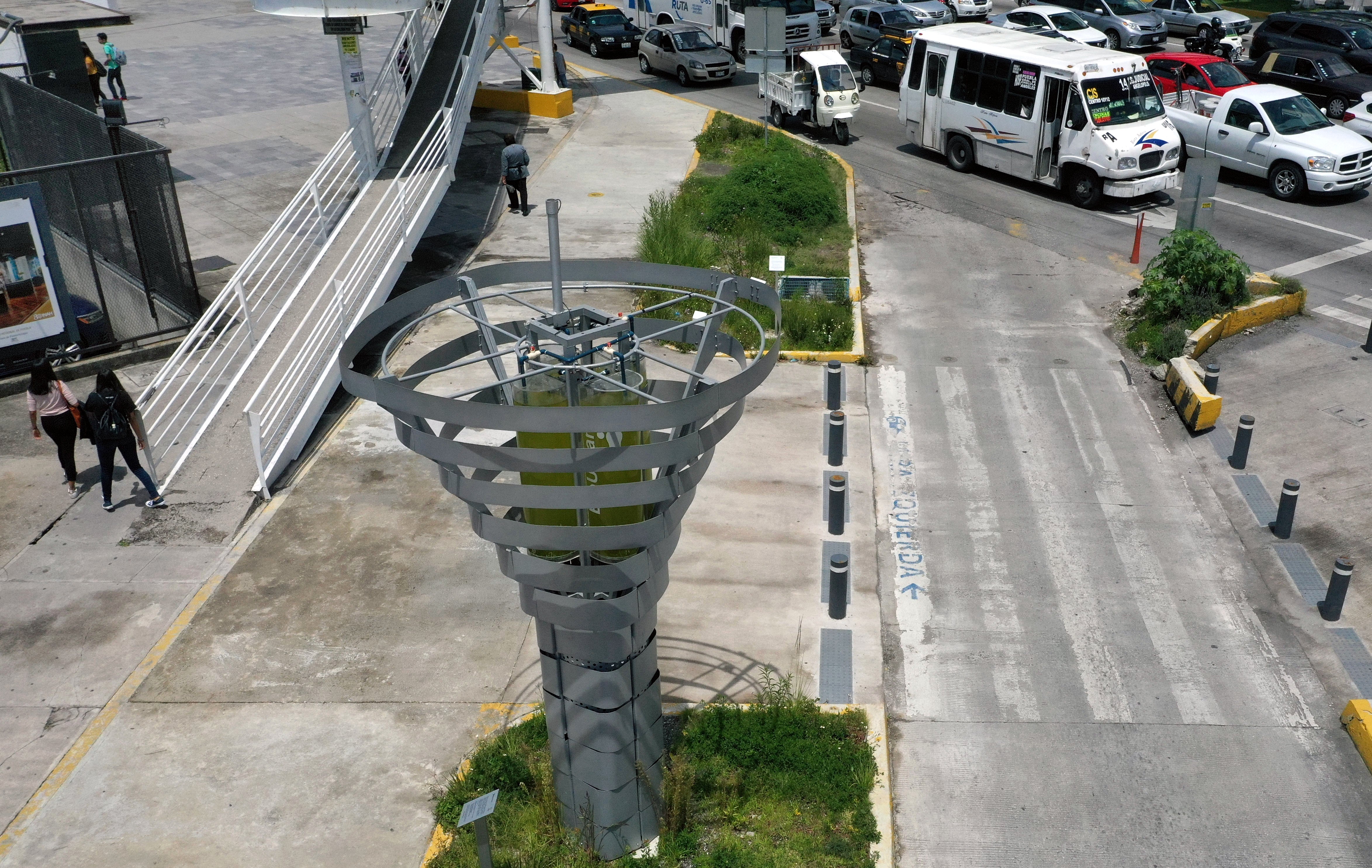 View of the “BioUrban 2.0” air purification system in Puebla, Mexico on August 7, 2019. – Mexican company Biomitech created an artificial tree, which through live algae, carries out a process of photosynthesis, doing the equivalent to what 368 natural trees would do. (Photo by ALFREDO ESTRELLA / AFP)

PUEBLA, Mexico — Trees are one of the best things we have to clean the Earth’s air, but they have certain drawbacks: they need time and space to grow.

Enter the BioUrban, an artificial tree that sucks up as much air pollution as 368 real trees.

Designed by a Mexican start-up, the towering metal structure uses microalgae to clean carbon dioxide and other contaminants from the air, returning pure oxygen to the environment.

Measuring 4.2 meters (nearly 14 feet) tall and nearly three meters wide, the device looks something like a cross between a tree and a post-modernist high-rise, with a steel trunk that radiates rising bands of concentric metal.

“What this system does, through technology, is inhale air pollution and use biology to carry out the natural process (of photosynthesis), just like a tree,” says Jaime Ferrer, a founding partner in BiomiTech, the company behind the invention.

Mexicans know a thing or two about air pollution.

Mexico City, a sprawling urban area of more than 20 million people, regularly grinds to a halt under air pollution alerts, triggered by emissions from the capital’s more than five million cars, its polluting industries and even the nearby Popocatepetl volcano.

Ferrer says the company’s goal is to help such cities achieve cleaner air in targeted areas — those used by pedestrians, cyclists or the elderly, for example — when planting large numbers of trees is not an option.

Not competing with trees

Worldwide, an estimated seven million people die from exposure to air pollution each year, according to the World Health Organization.

“We decided our job was to not just stand by and let people keep dying,” says Ferrer.

Launched in 2016, BiomiTech has so far “planted” three trees: one in the city of Puebla, in central Mexico, where it is headquartered; one in Colombia; and one in Panama.

It has a contract for two more in Turkey, and projects in the works to install them in Mexico City and Monterrey, in northern Mexico.

A BioUrban typically costs about $50,000, though the final price varies depending on the site.

The company has mainly sold them to local governments so far, though private donors are providing the funding in Monterrey, an industrial hub that is also no stranger to air pollution.

Each tree weighs about one ton, and cleans as much air as a hectare (2.5 acres) of forest — the equivalent of what 2,890 people breathe in a day.

The project is reminiscent of another launched by a German firm in 2015, the “City Tree” — a giant, vertical square of moss that also uses photosynthesis to clean the surrounding air.

Ferrer insists the idea of the BioUrban is not to replace real trees, but complement them in areas where planting a forest would not be viable.

“They can be used in high-traffic areas, transportation terminals, where you can’t just plant a hectare of trees,” he told AFP.

“The system isn’t going to end air pollution in Mexico City. But it can alleviate the problem in high-traffic areas.”

Maria Jose Negrete, 21, who goes to university near the spot where the first tree was installed, is a fan.

“It uses technology to help the environment. That’s what we need right now,” she said. /muf