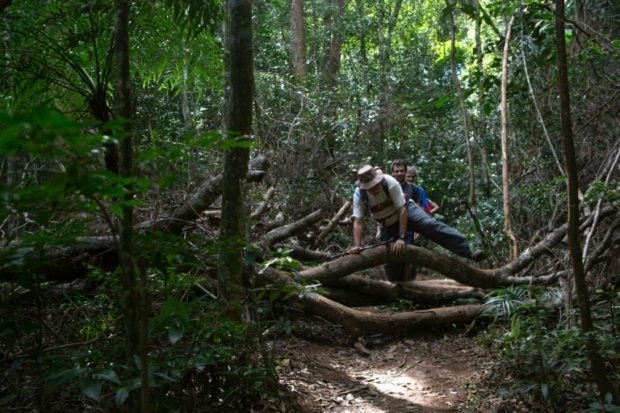 Deforestation has devastated the Mata Atlantica, or Atlantic Forest, in Brazil, and some activists worry that President Jair Bolsonaro will not do enough to protect it. Image: AFP/Ian Cheibub

Luiz Pedreira walks with other hikers beneath the Atlantic Forest’s thick canopy in Brazil, where an 8,000-kilometer trail stretching the full length of the country is being opened up.

He says he hopes that the creation of the trail, one of the world’s longest, will raise awareness about the fragility of the forest, long devastated by loggers and farmers, and now facing a renewed threat under President Jai Bolsonaro.

Inspired by long-distance tracks such as Canada’s 24,000-kilometer Great Trail, the project will connect paths from the southern town of Chui on Brazil’s border with Uruguay, to Oiapoque on its northern frontier with French Guiana.

The result will be a continuous coastal corridor for humans and animals. 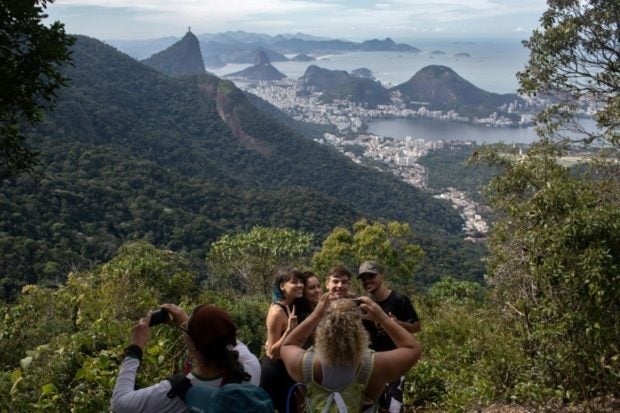 People take photos as they walk along a hiking trail above Rio de Janeiro, part of a projected 8,000-kilometer trail across Brazil. Image: AFP/Ian Cheibub

Work is already underway on the trail, which has the backing of Brazil’s environment and tourism ministries, but it could take years to complete.

“If you know something, if you are always in the forest, you will value it more,” Pedreira told AFP as he stands near a cliff offering 180-degree views of the heavily forested mountains and granite monoliths that divide Rio de Janeiro’s neighborhoods.

“It allows people to connect to the forest.”

Ranked by World Wildlife Fund as the second most diverse ecosystem on the planet after the Amazon, the Atlantic Forest, or Mata Atlantica in Portuguese, is teeming with thousands of plant and animal species. 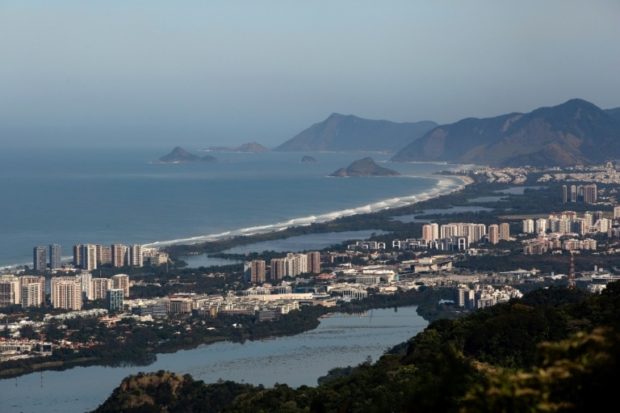 Tourists hike the forest trail for the amazing views, like this one from Mirante da Freira, one of the many lookout points. Image: AFP/Ian Cheibub

When the Portuguese first arrived in Brazil in the early 16th century, the forest covered more than 1.3 million square kilometers, an area roughly twice the size of France.

Since then, however, nearly 90% of it has disappeared, destroyed over centuries to make way for coffee plantations, sugar cane fields, mining, cattle grazing or cities.

While the rate of deforestation has slowed in recent years, according to SOS Mata Atlantica Foundation, there are fears that Bolsonaro’s anti-environment rhetoric will reverse that trend.

Deforestation in the Amazon, a rainforest seen as crucial to keeping climate change in check, soared 278% year-on-year in July, according to the National Institute for Space Research (INPE). 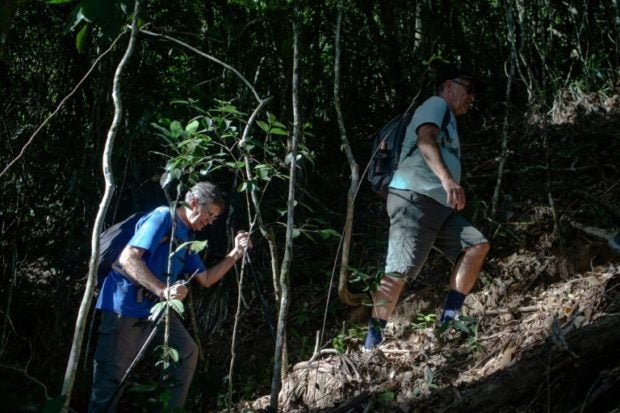 More than 90% of Brazil’s Atlantic Forest has been lost since the Portuguese first arrived in the country — to make way for coffee plantations, sugar cane fields, mining, cattle grazing or cities. Image: AFP/Ian Cheibub

That follows a 90% increase in June compared to the year prior, figures Bolsonaro has called “lies” and which prompted the recent sacking of INPE chief Ricardo Galvao.

“Unfortunately, this government is not very good for the environment,” French businessman and long-time Rio resident Yves Lahure told AFP after finishing a six-hour hike on a trail that will form part of the coastal track.

But history shows the forest can be revived.

Much of the Atlantic Forest that envelops Rio was felled for coffee plantations in the 19th century, said Horacio Ragucci, president of the Brazilian Excursionist Center, as he leads a group along a dirt path made by slaves.

A water crisis forced then Brazilian emperor Dom Pedro II to seize the land and reforest it, creating what is today Tijuca National Park. 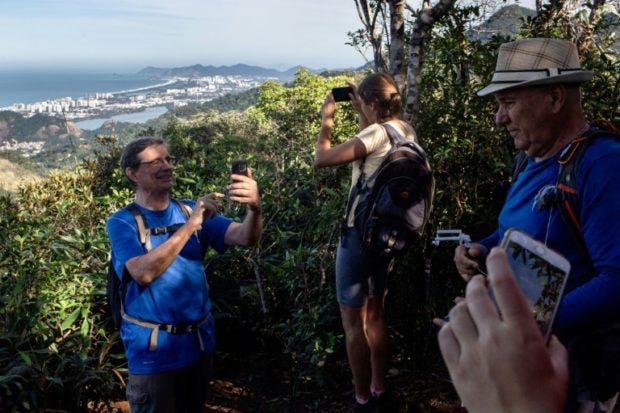 People take photos as they hike a trail above Rio de Janeiro, soon to be part of a countrywide network of hiking paths. Image: AFP/Ian Cheibub

Ragucci said the number of people visiting the forest has increased over the past 10 years, many motivated to find a scenic spot to snap a selfie.

“Today, groups meet on Facebook and gather 50 people to do a trail,” Ragucci told AFP.

“This data makes no sense, we need to take action.”

The trajectory of the trail is still being finalized, as authorities try to persuade private landholders in the forest to allow hikers, runners and mountain bikers to pass through their properties.

“If I could do it every week, I would,” said Andreza Albuquerque, as she and a group of hikers take a break during their walk, their sweaty backs to the trees as they gaze over the sprawling city and the Atlantic Ocean below.

“When Monday comes around, you start work with a totally different energy.” 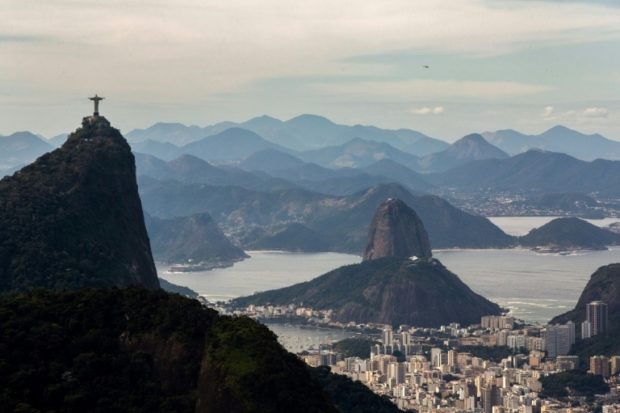 “Delight itself, however, is a weak term to express the feelings of a naturalist who, for the first time, has wandered by himself in a Brazilian forest,” Darwin wrote in his diary in 1832.

Lahure says he supports the idea of a trans-Brazil trail, though he worries the forest could one day attract too many nature lovers.

“We have a city of six million people,” Lahure said, referring to Rio.

“If everyone comes to Tijuca forest, it will be finished.” HM/JB

TOPICS: Amazon, Atlantic Forest, Brazil, Climate change, forests, hikers, Jair Bolsonaro, Rainforests, Rio de Janeiro, World Wildlife Fund
Read Next
Teens’ social media use could lead to higher levels of depression
EDITORS' PICK
Mandaluyong fire put under control hours after it started
Leveling up your ‘lutong bahay’ with the kitchen companion you never knew you needed
Bato de la Rosa, Risa Hontiveros back bill increasing female recruitment quota in PNP
Quarantine violations still punishable despite deleted provisions in ‘Bayanihan 2’ – Bato dela Rosa
Someone from the Philippines can become $356 Million richer this Tuesday
Cherry Mobile teams up with Cloud Panda PH, launches online store
MOST READ
‘If I had not been SolGen, I will make you eat your words,’ Calida tells Coco Martin
51 percent of German firms holding back investments in PH, but not because of COVID-19
5 car dealership outlets shutting down
Senate OKs bill authorizing president to postpone opening of classes beyond August
Don't miss out on the latest news and information.