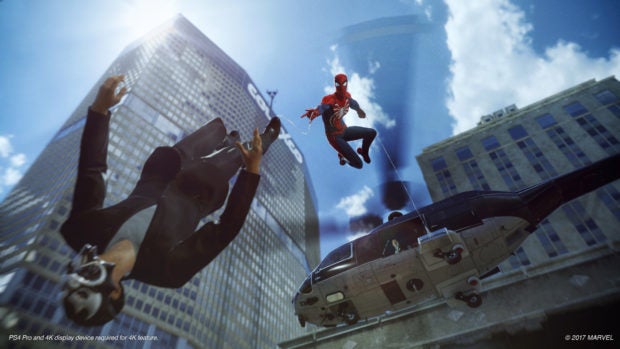 The studio worked with Sony interactive and Marvel Games on “Spider-Man,” which has sold more than 13.2 million copies worldwide, according to Sony. Image: Sony Interactive Entertainment via AFP

Sony did not disclose financial terms of the acquisition that will add Insomniac to its stable of studios making games exclusively for the Japanese consumer electronics giant’s PlayStation consoles.

“Insomniac Games is one of the most highly-acclaimed development studios in the industry and their legacy of best-in-class storytelling and gameplay is unparalleled,” Sony Interactive Entertainment Worldwide Studios chief Shawn Layden said in a statement.

The take-over will need regulatory approval.

California-based Insomniac was founded some 25 years ago and fielded successful video games including “Ratchet & Clank”, “Spyro the Dragon” and “Resistance”.

The studio worked with Sony interactive and Marvel Games on “Spider-Man”, which has sold more than 13.2 million copies worldwide, according to Sony.

“We have enjoyed a special relationship with PlayStation practically since our inception,” Insomniac founder and chief executive Ted Price said. “Our partnership amplifies our potential, and ‘Spider-Man’ was a testament to this.”

Sony is out to add Insomniac to its stable of studios as it prepares a new generation PlayStation.

In June, American technology veteran Microsoft gave the world the first glimpse at a powerful next-generation Xbox that it aims to release late next year.

The commitment to consoles by longtime rivals in the market comes with the rise of video games hosted as subscription services streamed Netflix-style from data centers in the internet cloud.

The new gaming platforms disrupt the industry by giving users the ability to avoid consoles and game software on disc or download.

Sony launched its PlayStation Now game service five years ago, allowing titles to be streamed to its current-generation consoles or Windows-powered computers.

Google is to launch its Stadia game streaming service in 14 countries from November.

The Stadia tech platform aims to connect people for interactive play on PCs, tablets, smartphones and other devices.

Apple has announced plans to launch a new game subscription service called Apple Arcade later this year, with at least 100 titles available at its debut.

Meanwhile, Microsoft has been testing its Project xCloud game-streaming technology.

Adapting to the new trends will be critical for players in the massive video game industry which last year generated more than $135 billion globally and $43.4 billion in the United States alone. HM