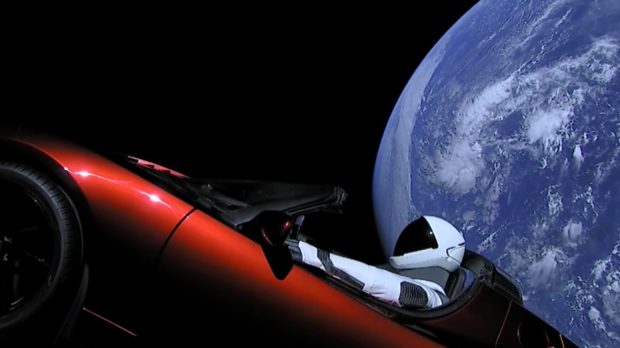 An image of SpaceX’s Tesla Roadster after being launched into space. Image: SpaceX via AFP Relaxnews

On Sunday, Aug. 18, 557 days after Elon Musk’s SpaceX launched a Tesla Roadster into space, the car and its driver, a mannequin named “Starman” dressed in a spacesuit, have completed their first complete orbit around the sun together, according to the tracking site Where Is Roadster.

According to the website, at the time of orbit completion, Starman and his Roadster had traveled over 762 million miles, traveling at about 75,000 miles per hour. If the music was still playing, Starman would have listened to “Space Odyssey” over 150,000 times and “Is there Life on Mars?” over 200,000 times.

Unfortunately, earthlings will not be seeing the vehicle and its passenger anytime soon, as its next close approach to Earth is not expected until Nov. 6, 2020, with the following not taking place until March 30, 2021. HM

‘Touch the sun’: NASA spacecraft hurtles toward our star