US sanctions on Huawei bite, but who gets hurt? 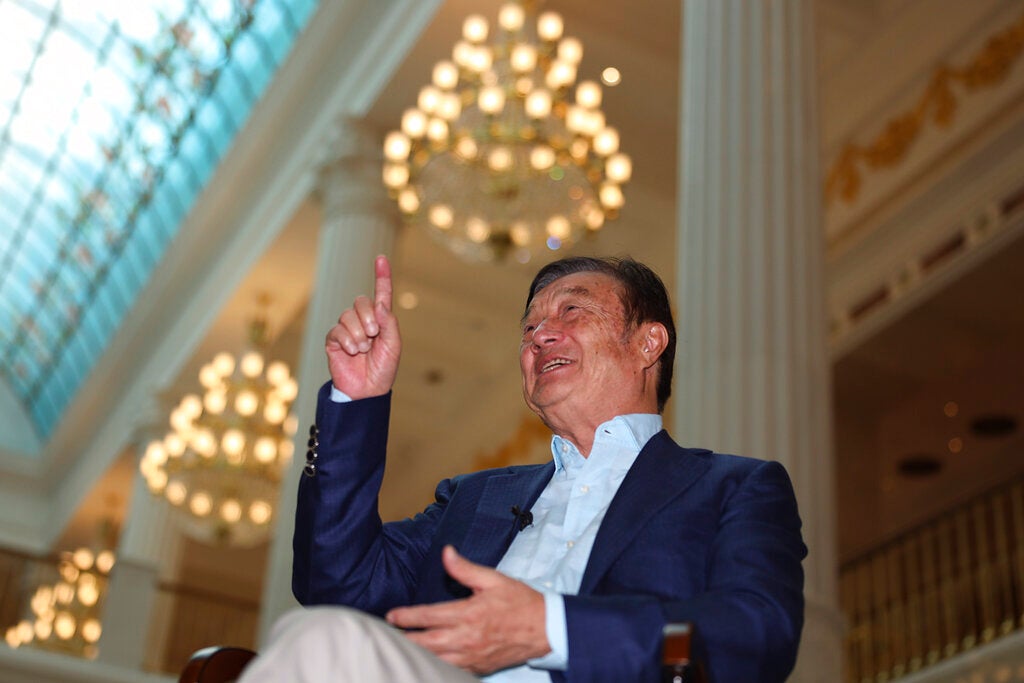 China tech giant Huawei’s founder Ren Zhengfei, speaks during an interview at the Huawei campus in Shenzhen in Southern China’s Guangdong province on Tuesday, Aug. 20, 2019. Ren said he expects no relief from U.S. export curbs due to the political climate in Washington but expresses confidence the company will thrive with its own technology. (AP)

Chinese technology giant Huawei has yet to feel the full force of U.S. sanctions due to temporary exemptions and other uncertainties.

Nonetheless, Huawei founder Ren Zhengfei says he expects no permanent relief because of the political climate in Washington. In an interview with The Associated Press, he also expressed confidence the company will thrive because it is developing its own technology.

In May, the U.S. Commerce Department placed Huawei on its so-called Entity List. That effectively bars U.S. firms from selling it technology without government approval. The move escalates trade-war tensions with Beijing and risks dividing the world into two technology spheres as Huawei becomes more self-sufficient.

Here’s a look at what’s behind the dispute and what it means.

Huawei is the world’s leading provider of networking equipment, but it relies on U.S. components including computer chips. About a third of Huawei’s suppliers are American. Many are no longer permitted to sell to Huawei.

Huawei’s smartphones, for example, will have to stop using the consumer-friendly version of Google’s Android operating system that comes with maps, music and other popular services. Without those services, smartphone makers such as Samsung would have the advantage.

Exceptions to the sanctions

This week, the U.S. government extended by another 90 days a limited reprieve on a narrow list of products and services. Commerce Secretary Wilbur Ross said the main aim is to give smaller U.S. internet and wireless companies that rely on Huawei more time to transition away from reliance on its products. The grace period allows U.S. providers to alert Huawei to security vulnerabilities and maintain existing equipment.

Monday’s updated order removes an exemption for technology related to the development of standards for next-generation wireless networks known as 5G. It also requires Huawei to issue written certification for all permitted imports.

Under Entity List rules, many other technology exports are permitted to Huawei. U.S. semiconductor companies can, for example, continue to supply Huawei with microprocessors and chips made outside the United States, analysts say. Such products account for a significant portion of sales to Huawei.

What’s behind the sanctions?

The U.S. defense and intelligence communities have long accused Huawei of being an untrustworthy agent of Beijing’s repressive rulers — though without providing evidence. The U.S. government’s sanctions are widely seen as a means of pressuring reluctant allies in Europe to exclude Huawei equipment from 5G. Washington says it’s a question of national security and punishment of Huawei for skirting sanctions against Iran, but the backdrop is a struggle for economic and technological dominance.

China already has a policy seeking technological independence by 2025. Huawei is now likely to move toward making all components domestically. Earlier this year, Huawei released its own chip for next-generation smartphones and the first phone based on that chip. Recently, the company unveiled its own smartphone operating system it said can replace Android.

While most consumers in the U.S. don’t even know how to pronounce Huawei (it’s “HWA-way”), its brand is well known in most of the rest of the world, where people have been buying its smartphones in droves.

Huawei stealthily became an industry star by plowing into new markets, developing a lineup of phones that offer affordable options for low-income households and luxury models that are siphoning upper-crust sales from Apple and Samsung in China and Europe.

That formula helped Huawei establish itself as the world’s second-largest seller of smartphones. Research firm IDC says Huawei’s shipments increased 8% to reach 58.7 million in the second quarter, though executives believe the company could have done better without the sanctions.

The U.S. sanctions could have unwelcome ripple effects in the U.S., given how much technology Huawei buys from U.S. companies, especially from makers of the microprocessors that go into smartphones, computers, internet networking gear and other gadgetry.

More than 52,000 technology jobs in the U.S. are directly tied to China exports, according to the Computing Technology Industry Association, a trade group also known as CompTIA.