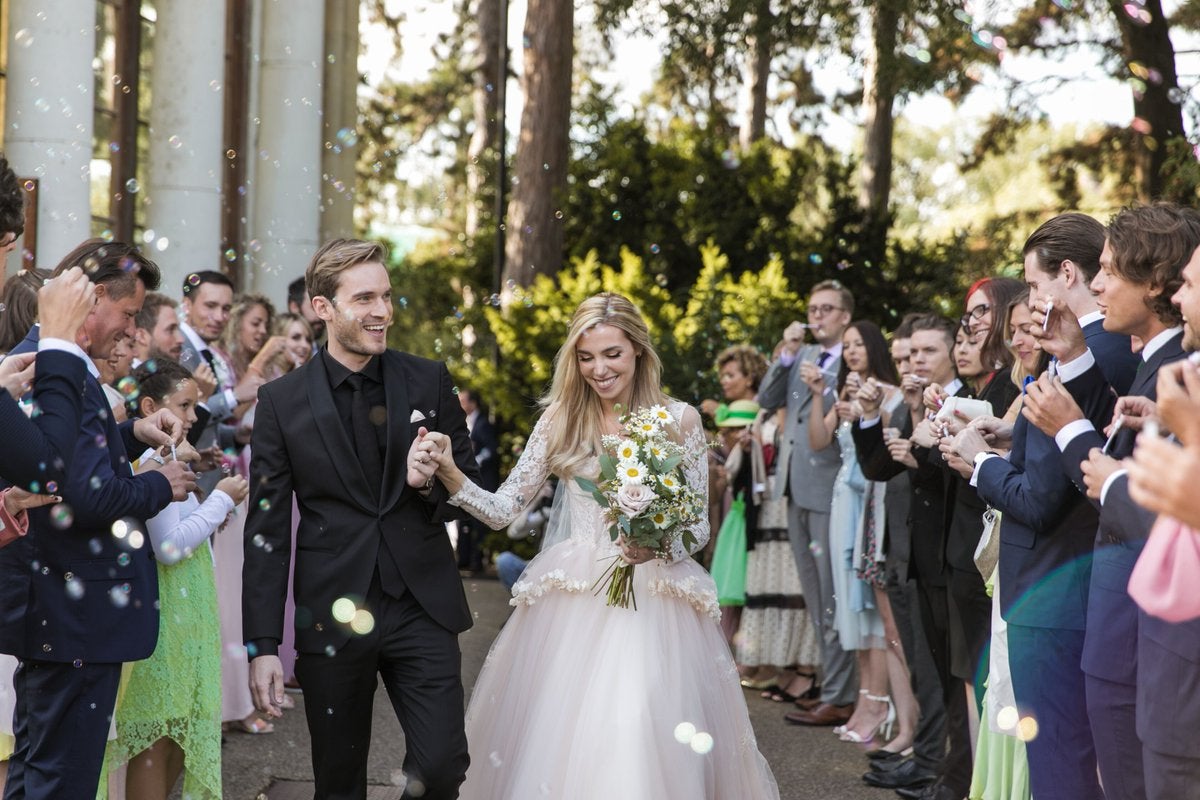 The couple each posted about the milestone day on their social media pages. According to Bisognin in an Instagram post on Tuesday, Aug. 20, the wedding took place “exactly 8 years since we met.”

“We celebrated our wedding with our closest friends and family. It was the most beautiful day, which I will treasure forever,” she said.

“We are married!!! I’m the happiest I can be. I’m so lucky to share my life with this amazing woman,” Kjellberg wrote on Instagram on Tuesday.

Kjellberg, a 29-year-old Swede, gained fame for his videos on YouTube which feature funny commentary while playing video games. His YouTube channel PewDiePie is close to becoming the biggest channel on the platform with over 99 million subscribers.

The massive number of followers makes him lucrative to advertisers, and PewDiePie has been listed in the top 10 highest-paid YouTubers of 2018, as per Forbes.

Bisognin is an Italian internet personality who used to be active on her lifestyle YouTube channel and has since moved into fashion design and entrepreneurship.

With fame comes controversy, and Kjellberg has faced backlash for videos with Nazi references or anti-Semitic imagery, leading to Disney cutting ties with him in 2017.

He also apologized after using the n-word during a live stream in 2017. In 2018, he apologized for sharing a meme that mocked singer Demi Lovato after a suspected drug overdose.

TOPICS: Marzia Bisognin, PewDiePie, wedding, Youtube, YouTube star
Read Next
Need a mental break from work? Don’t check your phone, says new study
EDITORS' PICK
Garcia softens stance, meets IATF halfway on swab-upon-arrival policy
Want to help local farmers? Shop small and eat Real Food
ICC is everything but a court of ‘white people’
Manila is 78th most expensive city in the world for foreign workers
TeaM Energy pushes development programs to help in pandemic rebound
Piolo Pascual: The Ultimate Heartthrob continues to level up
MOST READ
Sharon Cuneta on living in the US: ‘Nagagawa ko lahat ng normal na bagay’
Mike Nieto asks fans: ‘No below the belt remarks’ toward South Korea
Duterte-Duterte tandem possible but ‘winnability is another question’ — Binay
ICC is everything but a court of ‘white people’
Don't miss out on the latest news and information.