Your subscription could not be saved. Please try again.
Your subscription has been successful.
News
global nation
business
lifestyle
entertainment
technology
sports
opinion
HEADLINES
LATEST TECHNOLOGY STORIES
HOW TO
technology / Internet
Internet
Preserving culture in the age of technology 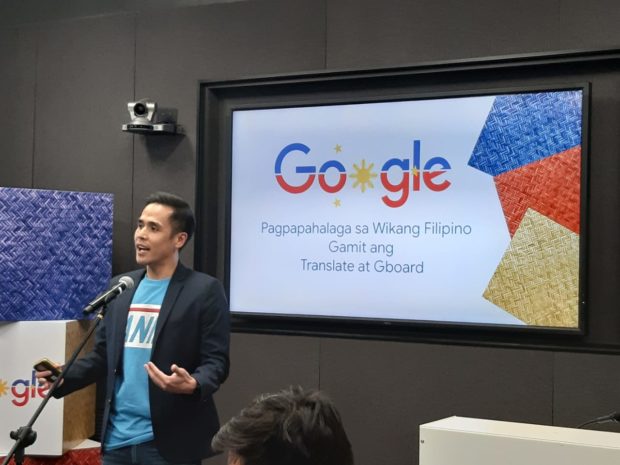 Google Philippines Marketing Head Gabby Roxas explains the importance of preserving local languages and scripts in the age of technology as they unveil the availability of Baybayin and other indigenous scripts on Gboard, and translation of Cebuano words and phrases through Word Lens. The new features were launch in culmination of Buwan ng Wika. INQUIRER.net photo / Neil Arwin Mercado

MANILA, Philippines — You can now use Baybayin and other indigenous scripts when searching through Gboard, as well as translate Cebuano words using Word Lens.

Google launched these new features Thursday in culmination of the month of August, the country’s National Language Month or Buwan ng Wika.

Gabby Roxas, Marketing Head of Google Philippines, said that the latest features seek to preserve the country’s local languages and indigenous script in view of the continuously growing age of technology.

“At Google, we are committed to helping preserve the country’s local languages and scripts through relevant technology. Adding more Filipino languages and scripts on helpful products like Translate and Board is one of the many ways we show this commitment,” Roxas said at the launch of the new features at the Google Philippines headquarters in Bonifacio Global City, Taguig City.

Four indigenous scripts namely Baybayin, Tagbanwa, Buhid, and Hanunuo were added to Google’s Gboard, an application that allows users to use the Google search engine and send results to another person straight from their messaging application’s keyboards.

If Gboard is installed, users no longer have to leave their messaging applications to make a Google search as they can do so by just clicking on the Google icon on their keyboards.

With the latest features, users can use Baybayin and other indigenous scripts to make their search.

“We just announced that our four indigenous scripts are now available on Gboard. It’s our way of showing how technology can be used to honor, to celebrate, and to preserve our local languages and native scripts,” Mervin Wenke, Communications and Public Affairs lead of Google Philippines told INQUIRER.net at the sidelines of the event.

Picture yourself traveling in the beautiful city of Cebu.

While you are enjoying the good food and sites in the city, you got lost while walking around and all you see are signages written in Cebuano.

With the new Word Lens update, one can easily point their camera on the signage and the feature will translate the Cebuano words or phrases to the language of your choice.

Word Lens is a feature within the Google Translate application that provides instant translation of words or phrases foreign to the user only with the use of their cameras.

Cebuano is now available on Word Lens, a feature within the Google Translate app. If you are traveling in Cebu, you can easily translate Cebuano signages to language of your choice through your camera. @inquirerdotnet #PinoyPrideOnGoogle pic.twitter.com/wAOEywN6ct

Word Lens now allows users to translate 88 languages into 100 languages and these translations may not be necessarily to or from the English language.

Both Gboard and Google Translate are available on Play Store and App Store.

Lucero also said that while it is unavoidable to not use foreign language especially in business set-ups, there are other means to show one’s love and respect for the country’s culture.

During the launch, guests were also educated on the history of Baybayin as well as a crash course on Baybayin writing. /jpv