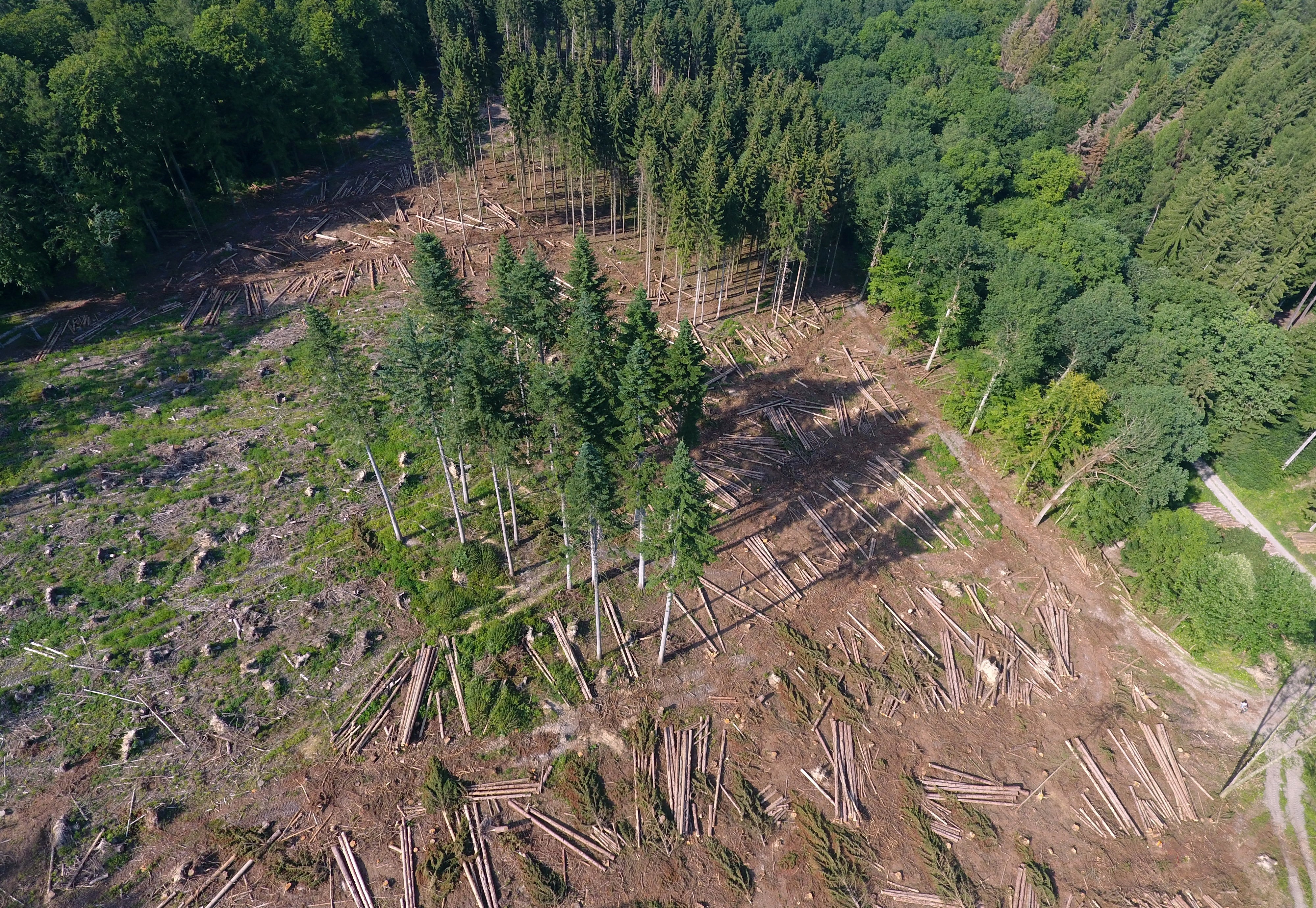 In this file photo taken on July 25, 2019, an aerial view shows logs and spruce trees in a forest suffering from drought stress in Hoexter, western Germany. Germany’s forests have long been treasured by its people, so the country has reacted with alarm and dismay as a beetle infestation has turned climate-stressed woodlands into brown ecological graveyards. Photo by INA FASSBENDER / AFP

Welzow, Germany — Germany’s forests have long been treasured by its people, so the country has reacted with alarm and dismay as a beetle infestation has turned climate-stressed woodlands into brown ecological graveyards.

After two unusually hot summers in a row, vast patches of the forests mythologized by medieval fairytales, Goethe’s writings and Romantic painters have turned into tinder-dry dead zones.

Given the scale of the threat to the one-third of German territory covered by trees, Chancellor Angela Merkel’s government will try to formulate new strategies at a “forest summit” on Wednesday.

The immediate culprit has been the tiny bark beetle, which has gone on a rampage as trees in water-starved habitats have lost their natural defenses.

In vast parts of Germany, like Welzow forest 100 kilometers (60 miles) south of Berlin, once healthy trees have become defoliated skeletons, their trunks marked by tell-tale networks of tiny tunnels.

“The insect eats the bark and lays eggs inside,” said forest ranger Arne Barkhausen. “The larvae then start to eat the trunk and block the nutrient pathways of the tree, which dies in about four weeks.”

The die-off has been front-page news in Germany, where millions enjoy regular walks in the woods and forester Peter Wohlleben’s book “The Hidden Life of Trees” became a runaway best-seller.

The worst forest crisis since the acid rain of the 1980s has come as climate change has shot to the top of the political agenda, highlighting the value of forests not just as water filters and biodiversity hotspots but also as natural carbon sinks.

Hectares of spruce and pine, beech and oak forest have fallen victim to the pest in Bavaria, Thuringia, and other states.

In Saxony, the German army was even called in this month (September) to help overwhelmed foresters clear dead trees in what state authorities labeled an “unparalleled disaster”.

Germany boasts 90 billion trees, according to the latest survey from 2012. About 1.1 million people work in forestry and related sectors, more than in the automotive industry.

But experts warned there are no easy fixes to the bark beetles’ onslaught since the underlying cause is beyond the control of any single nation: global warming.

“Beetles have always been there, they have been creating problems for 200 years,” said Peter Biedermann of Wuerzburg University’s Department of Animal Ecology and Tropical Biology.

He said the current crisis started with the severe winter storm Friederike in January 2018 and the prolonged droughts that followed.

“Since 2018 the attacked trees have been underwater stress and their roots are no longer deep enough,” explained Biedermann.

The beetles, meanwhile, benefit from global warming because more of them survive the milder winters and they emerge earlier in the year, breeding not one or two but up to four generations per year.

Larissa Schulz-Trieglaff of the Forest Owners Association said all this had “caused the beetle population to explode” resulting in the “catastrophe of the century” for German forests.

Many drought-stressed trees, meanwhile, have been too weakened to produce enough of the sticky sap that traps bugs or repels them with natural insecticidal compounds.

And there are few effective ways to fight back, said Derk Ehlert, head of wildlife in the city-state of Berlin.

“We have trouble coping with it, we can’t use chemicals,” he told AFP. “When the animal is already in the tree, it stays there,” he said. “We, therefore, try to support the natural enemies of bark beetles, especially wasps, which like to eat their eggs and larvae.”

But Biedermann warned that the bigger problem was the vulnerability of Germany’s vast forestry monocultures.

Many forests resemble tree farms where a single species, planted in neat rows, cover hundreds of hectares, most commonly spruce planted since the lean post-war years.

The Forest Owners’ Association also advocates an ecological diversification of German forests, a process already ongoing in many areas.

Germany will need more trees that are better adapted to global warming, such as American red oak or Japanese larch, it argues.

But it predicted that the challenge will be huge: a massive reforestation program will take many years and cost about 2.3 billion euros ($2.5 billion). /kga